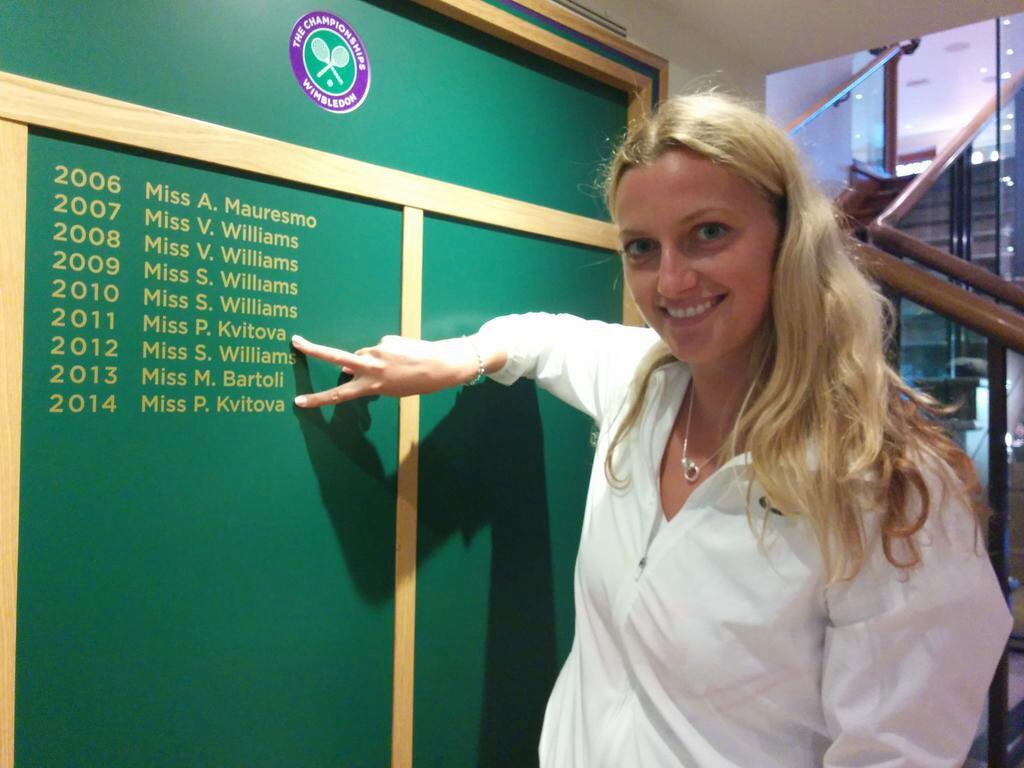 I sat down to view the 2014 women’s final at Wimbledon and before my seat was warm enough, it was over. Sixth-seeded Petra Kvitova of the Czech Republic dominated 13th-seeded Eugenie Bouchard of Canada 6-3, 6-0 in only 55 minutes Saturday to add to her 2011 title at the grass-court Grand Slam.

Kvitova came into the tournament as the third favorite to win the tournament behind Serena Williams and Maria Sharapova. Her career at the All England Club is now 26-5 an .839 winning percentage, compared to her marks of .667 at the three other majors and .681 at all other events. “This one is more special with my journey of getting back,” Kvitova said. “I feel at home when I play a grass final.”

This win in 2014 gives Kvitova a breath of fresh air as the US Open approaches. She lost in the first round at the hard-court Australian Open, and in the third round at the clay-court French Open. On the grass court she would not be outshined with those speedy serves and flat forehands.

The 24-year-old left-hander hit serves that reached 113 miles per hour and earned easy points. She walloped big, deep returns that left Bouchard little time to react. Kvitova accumulated a 28-8 edge in winners and won 11 of 14 points she played at the net. At one point Bouchard looked up to her players’ box seeming to ask advice to her coach, but only a rain delay would’ve helped with clouds in the distance. The box along with family included actor Jim Parsons, who portrays Sheldon Cooper on the CBS comedy hit The Big Bang Theory. There was nothing comedic about this one-sided match.

Few expected a one-sided match as Bouchard had not dropped a set until the final. Bouchard lost in such a lopsided manner despite only four unforced errors. “Petra played fantastic these two weeks. It was tough for me today but I’m proud of how I played this whole tournament,” Bouchard said. “I feel like it is a step in the right direction.” The previous time a runner-up won only three games in the Wimbledon final was 1992 when Steffi Graf beat Monica Seles. Before that, it hadn’t happened since 1983 when another Czech lefty, Martina Navratilova, defeated Andrea Jaeger. Within an hour the Canadian’s first final was over.

A small rain shower arrived when the match concluded as the retractable roof closed for the trophy presentation. Both players left the court for a moment. Bouchard was told to wait in the room used to engrave champions’ names. “I was watching them work,” Bouchard said, “wishing one day — dreaming — that he’ll write my name somewhere.”

Kvitova was thrilled to have her idol, nine-time champion Navratilova present Saturday. She remains the only player born in the 1990s to win a major singles title. Bouchard, 20, would have been the second.

Kvitova will rise to No. 4 in the rankings Monday. I can gamble that chasing the No.1 ranking is added motivation.