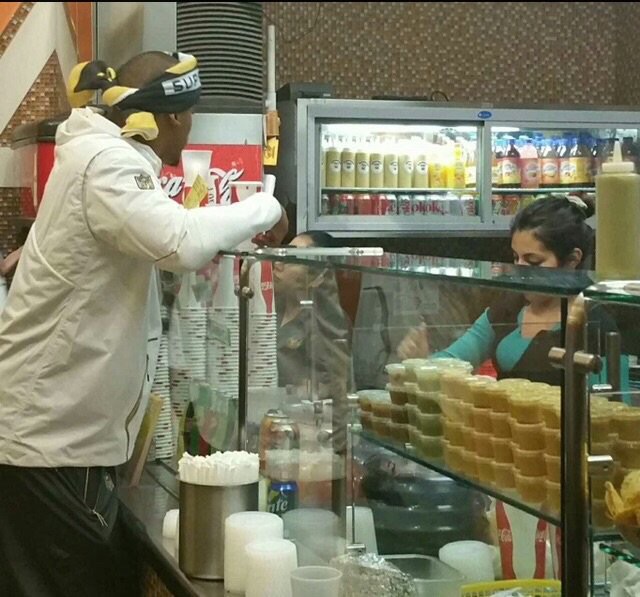 Cameron Jerrell Newton, the Carolina Panthers quarterback and presumptive league MVP. Goes by the playing name Cam Newton. Cam enjoys dab-bing, I don’t. Cam wears Versace gold zebra-striped pants, I would pass. He’s only 26 years old, and he’s just now emerging as a full-fledged NFL megastar. I am older than Newton however I’ve been known to have a nice smile like him. Okay still no comparison. We are both black men. Is race the issue? Yes and no. Cam Newton’s style of play is what makes him so polarizing.

I’ve seen Newton’s style of play at defensive and offensive positions. Michael Irvin as a wide receiver. Deion Sanders at the defensive back position high stepping. Defensive end J.J. Watt sure knows how to celebrate after a sack on a mediocre Houston Texans team. Cam Newton plays quarterback and we have not seen a QB like him ever. A quarterback who actually wins, moreover an MVP candidate. Coincidently he will be playing in Super Bowl 50. History shows film of Bart Starr, Terry Bradshaw and Joe Montana. Leaders of their respective teams, Newton is leading a Panthers team in a different way we are used to. He is dabbing, laughing, illustrating he is a superman character who is now center stage.

For the fourth straight year, a black quarterback will start in the Super Bowl (Colin Kaepernick and Russell Wilson back-to-back). Only three black quarterbacks started in the previous 46 Super Bowls, and the black quarterback is still under attack. Russell Wilson of the Seattle Seahawks has Super Bowl experience along with a ring, off the field he is a devout Christian who visits sick kids in local hospitals. However, it is Newton who gives footballs out to kids at the football games. Two great quarterbacks, but the one who plays for the team located in the South, is the one getting backlash for enjoying the moment and also being true to his personal definition.

As mentioned I will pass on the tight-fitting Versace pants, but Newton carries himself in a way that suggests he’s going to enjoy playing football and living his life. Wilson does not have the on-the-field flare and Indianapolis Colts quarterback Andrew Luck has some catching up to do. Newton is on the verge of something we have never seen in the NFL. “What he’s done in the short time being an NFL quarterback, he’s been awesome,” Peyton Manning said of Newton. With Manning possibly playing in his last football game, is Newton ready to accept the baton? Is he ready to be the quarterback who sets the standard for the next 10 years?

Newton has not changed. He has been personally celebrating since college. The only thing that has changed at the NFL level is that he is winning. “The most important stat is wins and losses,” Newton said. “Tom Brady and Peyton Manning, those guys that set the bar were finding ways to win football games.” Celebrating has been part of the game, however the fact that you are the black face of the franchise and leading it, rubs the old schoolers the wrong way. Meanwhile, he already stands as a franchise player who has never embarrassed his franchise off the field.

Running back Marcus Allen won the Heisman Trophy, college football national championship, NFL MVP, Super Bowl MVP and Super Bowl. Cameron Jerrell Newton is favored to win the MVP and is looking to become the first quarterback pending a Super Bowl win and Super Bowl MVP to join Allen and his array of accomplishments. Since race still matters in 2016 if you add that in fall 2009 he led Blinn College to the 2009 NJCAA National Football Championship he would be the first black player ever to achieve this. That’s worth dabbing in fur pants.