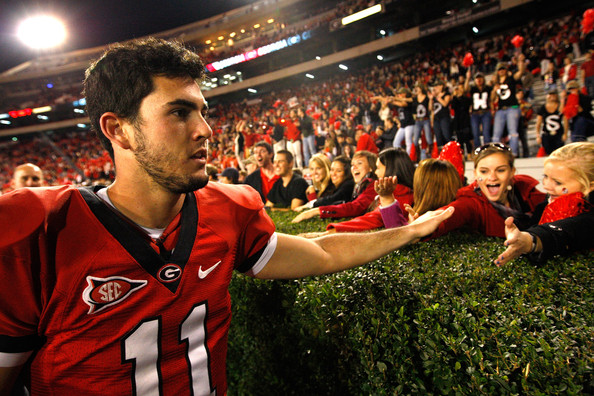 The bands, rivalries, tradition and pageantry all collectively make up the atmosphere of college football. The season kicked off Thursday night with games played through the Labor Day weekend and culminates on Monday when the Pittsburgh Panthers play host to the Florida State Seminoles. With so many universities, colleges and military academies all playing weekly, I will preview one game or more a week that I consider a can’t miss matchup to watch and attend.  I will also add my Worldwide West pick. My game of the week this week … the Georgia Bulldogs visiting the Clemson Tigers.

The Bulldogs were overlooked last season. They went 12-2 and nearly upset Alabama in the SEC Championship Game last season. It will be the usual members of the entourage for the team this season. Nine starters are back on offense, led by senior QB Aaron Murray (65 percent completion percentage, 36 TD, 10 INT last year), 1,300-yard rusher Todd Gurley and the entire offensive line. Only three starters return on defense after the loss of last year’s top four tacklers.

Georgia begins their title hunt and Clemson is the first team in the way. The Tigers knocked off then-No. 9 LSU in the Chick-fil-A Bowl last season and can become the first non-conference opponent to win back-to-back games against the top-10 throne of the SEC. Clemson’s offense put up points and Georgia’s defensive inexperience with players lost to the NFL draft is good news for the Clemson offense. Six starters are back on offense, led by senior QB Tajh Boyd (67 percent completion percentage, 46 total touchdowns last year) and WR Sammy Watkins. But Clemson might have to rely upon Boyd even more than last year with the departure of 1,000-yard rusher Andre Ellington, and the defense has to replace four of last year’s top six tacklers.

There will be offensive fireworks from both teams moreover tension will be high.  Georgia holds a 41-17-4 edge over Clemson. They have not faced the Tigers since earning their fifth straight win in the series in 2003. The “Dawgs” won 30-0. If the Bulldogs lose this matchup it does not mean their national title hopes are over. Because of the famous three letters SEC; in the last seven years five teams have won a title with one loss on the resume from the conference. The pressure will be on Clemson and they can play early spoiler.