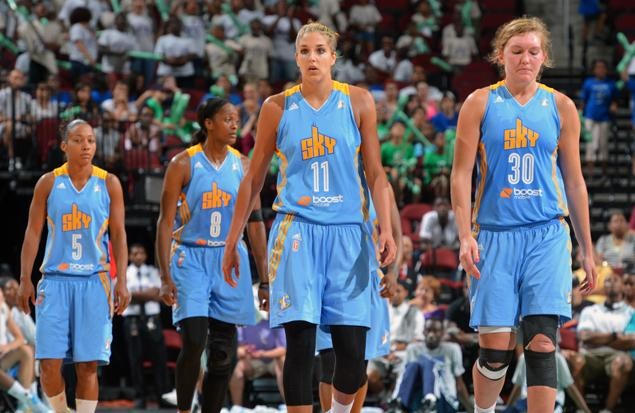 Sylvia Fowles led the Sky to their sixth straight win with 18 points and Elena Delle Donne had 15. Chicago entered its eighth year as the only active franchise in the WNBA, NBA, MLB, NHL or NFL without a postseason appearance. They checked that off the bucket list and will enter the playoffs as the favorite to come out of the East in their first postseason appearance.

Chicago led by one point at halftime before cruising away by outscoring Atlanta 30-11 in the third quarter. “We came out after being off for a week. We just tried to be focused as much as possible,” Fowles said. “Just taking a week off is hard in general, but just to come out and feel that way and contribute on the court the way we did tonight, I think it was amazing.”

The Sky clinched the East with five games remaining. Delle Donne, the favorite to win Rookie of the Year award, has been a valuable part of the franchise’s success. “There’s a lot more we can do and improve on,” Delle Donne said. “That’s what you like to see at a time like this.”

The Dream are reading a book entitled “Injuries.” Angel McCoughtry, the league’s leading scorer, didn’t start for Atlanta due to an injured right ankle, but finished with 17 points. Atlanta was without starters Sancho Lyttle (left foot) and Armintie Harrington (concussion), and reserve Tiffany Hayes (left knee). “Everybody’s banged up at this point of the season,” McCoughtry said. “You’ve just got to try to dig deep and get through the game.” Atlanta, which had shot 55.9 percent in the first half, hit just 4-of-16 field goals in the third.

The Sky are chasing the Minnesota Lynx for the best overall record in the WNBA. Elena Delle Donne led all scorers with a season-high 32 points and the Sky to a 94-86 win over the Lynx in overtime this season. The last game of the season for both teams will be the Lynx playing host to the Sky.