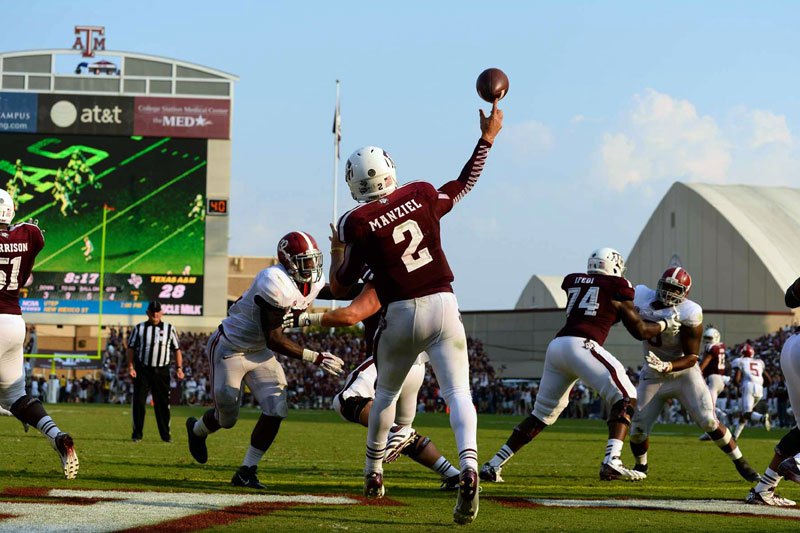 Justin Bieber walking out with Floyd Mayweather Jr. before the Canelo Alvarez fight was bad. Johnny Manziel, that is a bad boy, in a good way. A.J McCarron led No.1 Alabama Crimson Tide to a 49-42 win over Manziel and the No. 6 Texas A&M Aggies. The story lines were unparallel going into the football game. McCarron left with the storyline that mattered. A Crimson Tide win. The storyline over taking it; Heisman Trophy winner Manziel almost defeating Nick Saban and the Crimson Tide two years in a row.

Manziel is must see TV. He started the first quarter where he left off a year ago in Tuscaloosa.  Leading the Aggies to a two-touchdown lead with less than eight minutes to go in the first quarter. Then the game plan was simple from there for the Crimson Tide; outscore Manziel until the final whistle. Alabama scored 28 unanswered points to take a 14-point lead into the locker room at the half.

The second half was a continuation of where the No.1 team left off adding a huge defensive play and offensive play. Vinnie Sunseri returned an interception 73 yards for a score. All eyes were on McCarron when he changed an important play at the line of scrimmage. On third-and-goal from the 5, McCarron faked the handoff, rolled right and flipped to Jalston Fowler for the touchdown to make it 49-35 with 2:28 left in the fourth. “I was checking the whole game to see if they got in a certain defense to change a play, ” McCarron stated.

Manziel put up pro fantasy football numbers against team Roll Tide. Throwing for a career-best 464 yards, running for 98 and throwing five TDs. His 562 total yards is the second-most in Southeastern Conference history, ranking only behind the 576 he had against Louisiana Tech last season.

Crimson Tide head coach Nick Saban had the entire offseason to get ready for Johnny Football; his defensive game plan was to shut down the middle of the field. Manziel adjusted showing off his arm and went deep throughout the game. He had a career-high six completions on passes thrown 20 or more yards downfield Saturday. In two games against Alabama, Manziel has completed 71 percent of passes thrown 20-plus yards downfield, compared with 36 percent against all other teams. Manziel threw one more TD with 15 seconds left, but Alabama grabbed the onside kick and Saban was happy to know he hopefully will not see him again next season.

The game has evolved but not scouting. McCarron’s play was amazing throwing four touchdowns and no interceptions, however it was overshadowed by Manziel’s play. Scouts look at Manziel’s height and question if can he play in the National Football League. It’s not about the player instead the person. For example, what is the difference between Johnny Manziel and Seattle Seahawks quarterback Russell Wilson? Their behavior off the field. That is why NFL teams use private investigators, not because a quarterback can throw a 50-yard post. Manziel backed up the hype without a win; football fans will continue to investigate the hype as the season goes on.