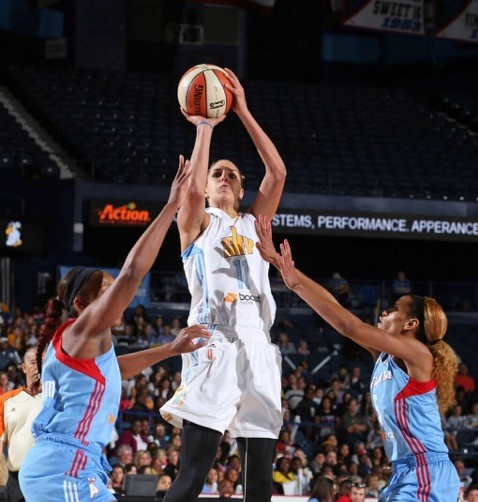 The Chicago Sky are off to their best start in franchise history moving to 4-0 after defeating the Atlanta Dream 87-73. Elena Delle Donne led all scorers with a season-high 27 points. The Sky were without starters Sylvia Fowles and Epiphanny Prince for the fourth straight game however Delle Donne has the team Skying the East. “4-0 is nice but we have more work to do to get better and improve,” the reigning Rookie of the Year stated.

Both teams battled each other in the first half considering Atlanta’s Angel McCoughtry, a two-time WNBA All-Star and scoring champion, was a late scratch after suffering a rhomboid strain earlier Saturday. McCoughtry was averaging 24 points per game entering the game. Erika DeSouza led Atlanta with 18 points and 12 rebounds, rookie Shoni Schimmel had 17. Schimmel finished with eight assists but led the team with five turnovers. “She will be the future leader of this team, I can live with her turnovers because I liken her a lot like Magic Johnson and she sees things out on the floor. My biggest concern with her is taking the bad shots,” Dream head coach Michael Cooper stated. Schimmel was the eighth-overall pick in this year’s WNBA draft for the Dream.

The second half belonged to the Sky. Chicago outscored Atlanta 46 to 34 and led by as many as 12 points in the fourth period. Allie Quigley scored 13 points off the bench, Courtney Vandersloot had 10 points and 11 assists. Courtney Clements and Markeisha Gatling joined the party with each adding 10 points.

Chicago’s previous best start was three wins to open last season. They look to add on to the franchise best when they play host to the WNBA defending champion Minnesota Lynx Memorial Day afternoon in a nationally televised home game.