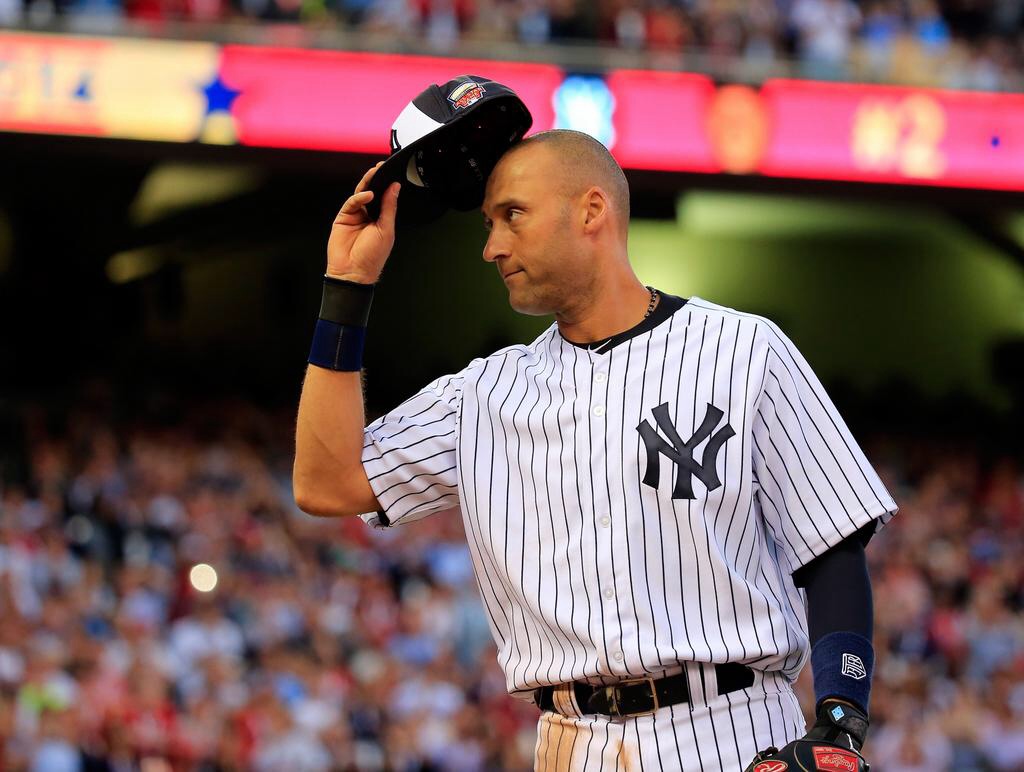 During a walk on a beautiful February winter afternoon in Miami, I received a notification text; Derek Jeter announced the 2014 season would be the last of his MLB career. In case you have been in a bunker hidden under a large boulder, Jeter has played in his last All-Star Game for the American League.

The 85th All-Star game did have a winner as the American League earned home-field advantage in the World Series by beating the National League 5-3 for its 13th win in 17 years.

Class, clutch, champion. These words are just a few to describe the New York Yankees captain who plays hard no matter how bright the lights are. He made a diving stop on Andrew McCutchen’s grounder to shortstop leading off the game, and nearly threw him out at first.

Jeter has seen 46,294 pitches in his career. Who would have known his first pitch ever from Adam Wainwright would come with controversy and basically take joy away from the game. He was introduced by a recording of late Yankees public address announcer Bob Sheppard’s deep monotone voice. St. Louis Cardinals pitcher Wainwright left his glove on the mound and backed up toward second, clapping along with the crowd of 41,048. Well deserved. Then came the pitch. Jeter doubled to right.

Word began to spread that Wainwright would groove pitches to Jeter. Social media via Twitter was so outspoken, fans made Wainwright do an interview during the game in which Erin Andrews spoke to him regarding the meatball pitches. “Sometimes my humor gets taken the wrong way, I feel terrible about this, if anyone has taken any credit away from what Derek Jeter has done off me, it was missaid, I hope people realize I’m not intentionally giving hits out there,” Wainwright stated. It has happened before; Denny McLain did it for Mickey Mantle, Chan Ho Park for Cal Ripken, but that’s when it was an exhibition game. Now you have home-field advantage at stake. Can you imagine the Cardinals playing Game 7 of the World Series on the road? The pitch will be the talk of the series.

The AL improved to 9-3 since the All-Star Game started deciding which league gets series home-field advantage; 23 of the last 28 titles were won by teams scheduled to host four of a possible seven games.

Jeter took advantage of whichever pitch was thrown over the plate. He went 2 for 2 with a run scored. The 14-time All-Star who was MVP of the 2000 game in Atlanta, ended with a .481 All-Star average (13 for 27), just behind Charlie Gehringer’s .500 average (10 for 20) among players with 20-or-more at-bats. “Makes me feel great this is what it is all about, fans have been great to me my entire career at home or on the road, you appreciate it even more,” Jeter stated. He was given another rousing cheer before his single to right starting the third and two and a half minutes more applause after AL manager John Farrell sent Alexei Ramirez to shortstop to replace him at the start of the fourth.

It was all Jeter who was mentioned more than 100 times during the telecast. I was hoping there would be a tribute to the late Don Zimmer and Tony Gwynn. Baseball needs greatness. Jeter was honored in a new Jordan brand commercial. The ad spot, which was released Monday, depicted a variety of fans from little kids to Billy Crystal tipping their hat at the Yankees’ captain as a sign of respect. WORLDWIDEWEST editor Nate was the only one who did not make an appearance since it included former New York Mayor Rudy Giuliani, Jay Z, Carmelo Anthony, Michael Jordan, Spike Lee, Tiger Woods, Phil Jackson and my favorite Maya Moore who tipped her Jordan brand hoodie. Cool ad but is commercialism the respect baseball needs? No. It needs the respect given to Zimmer and Gwynn.

The future is now on the end of the bat of Mike Trout, the top candidate to succeed the 40-year-old Yankees captain as the face of the AL. He seemed ready to assume the role with a tie-breaking triple and later a go-ahead double that earned the 22-year-old All-Star Game MVP honors. Trout became the second youngest All-Star MVP trailing Ken Griffey Jr. who won in 1992 when he was 22. Throw Miguel Cabrera’s name in that hat also as he hit a two-run homer to help seal the AL home-field advantage for the World Series.

It was Jeter’s last, but Yasiel Puig’s first All-Star Game. Puig was a surprise disappointment during the Home Run Derby. He was not better during the game itself; Puig became the second Dodgers player to strike out three times in an All-Star Game, joining John Roseboro in 1961.