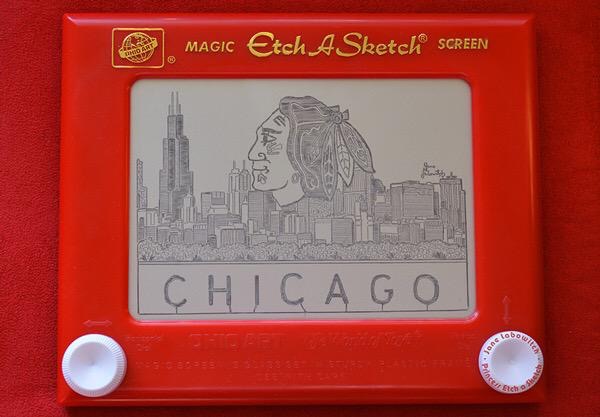 It was the sixth time, the third time in six seasons, 77 years in the making, but the Cup is home again in Chicago. The Chicago Blackhawks beat the Tampa Bay Lightning 2-0 in Game 6 of the Stanley Cup Final for their third NHL title in the past six seasons. The Blackhawks won the Stanley Cup on home ice for the first time since 1938.

As evident with the shutout, the Blackhawks’ defense was tremendous all series, however Duncan Keith was the answer offensively all series long. Keith scored in the second period as the Blackhawks held off Tampa Bay’s high-scoring attack. “It feels so great. You want to keep being a part of these things,” Keith said. “You don’t get these awards without being on great teams with great players, and like I said, I’m just proud to be a part of this group of guys who cares so much and do whatever it takes.”

Keith was selected for the Conn Smythe Trophy as playoff MVP after he finished with 21 points while playing more than 715 minutes in a grueling postseason. Keith is the second defenseman in history to win the Conn Smythe and score the game-winning goal in the Cup-clinching game. Bobby Orr did it for the Boston Bruins in 1970 and 1972.

The Blackhawks became the first team since the Detroit Red Wings won it all in 1997, 1998 and 2002 to win three titles in a six-season span. The vibe and scene in Chicago has been magnificent during the playoffs. Edge to Chicago. Chicago as a town deserves all the success. The Blackhawks were awfully bad for a time, but the loyal fans did not jump off the ship and were treated to a gem. It’s the first time the Blackhawks have clinched on home ice since April 12, 1938 (they won the 1961, 2010 and 2013 Cup titles on the road). Stan Bowman hit the switch for change with a dash of marketing and you have a recipe for success. Three of the four teams the Blackhawks beat this postseason had more points than they had during the regular season. The one that didn’t, the Wild, had two fewer points than the Blackhawks’ 102.

There was thunder and less lightning after the Blackhawks tied the series 2-2. The loss gave the Lightning their only three-game losing streak all season. The Lightning’s “Triplets” line (Tyler Johnson, Ondrej Palat, Nikita Kucherov) was held without a goal for the last 195:33 of the Stanley Cup Final (including each of the last three games). Injuries added less punch as Johnson revealed he played with a broken wrist and goalie Ben Bishop said he played with a torn groin.

The Blackhawks are the model franchise for the NHL. Are they a dynasty? Three titles in six seasons is quite impressive, especially when it is hard to keep a team of players together on the ice. Since and including that first Stanley Cup title during the 2009-10 season, the Blackhawks have the highest points percentage in the NHL at .649, including the playoffs. Mike “Doc” Emrick, NHL play-by-play voice for NBC, said it best stating we have to redefine what a dynasty is now. Particularly spelling it with a lower case “d” instead of a capital “d” when in the last 50 plus years, Montreal won five straight titles and later four straight, and the Islanders won four straight, you have to reclassify what a dynasty is.

Keeping important diverse pieces that include veterans, leadership from a captain, spontaneity and role players is a brilliant formula. The Blackhawks have a core of seven players who have won three Stanley Cups — Brent Seabrook, Patrick Sharp, Niklas Hjalmarsson, Marian Hossa, Patrick Kane, Keith and Jonathan Toews. All seven are signed for next season. Hossa, Kane, Keith and Toews are all signed into the next decade.

As the Blackhawks were skating themselves to their sixth Stanley Cup title, the Cup was not in the United Center. The Stanley Cup was late to the party; it got there five minutes before it was presented. The Stanley Cup itself was given a police escort for a trip that reached speeds of 100 mph. Untimely detours because of severe weather before the game was the cause for the delay. “Mother Nature was not a hockey fan tonight,” the head keeper of the Cup, Phil Pritchard, told ESPN.com. Interestingly in 1938 when the Blackhawks won, the Cup was not even in Chicago. It was still in Detroit because the Red Wings won it the previous year and still had it. The trophy may have arrived late, but the celebration started on time after a 77-year wait.

0 0 0 0
Previous : American Pharoah wins Triple Crown and joy was the icing
Next : Warriors, come out to play-i-ay