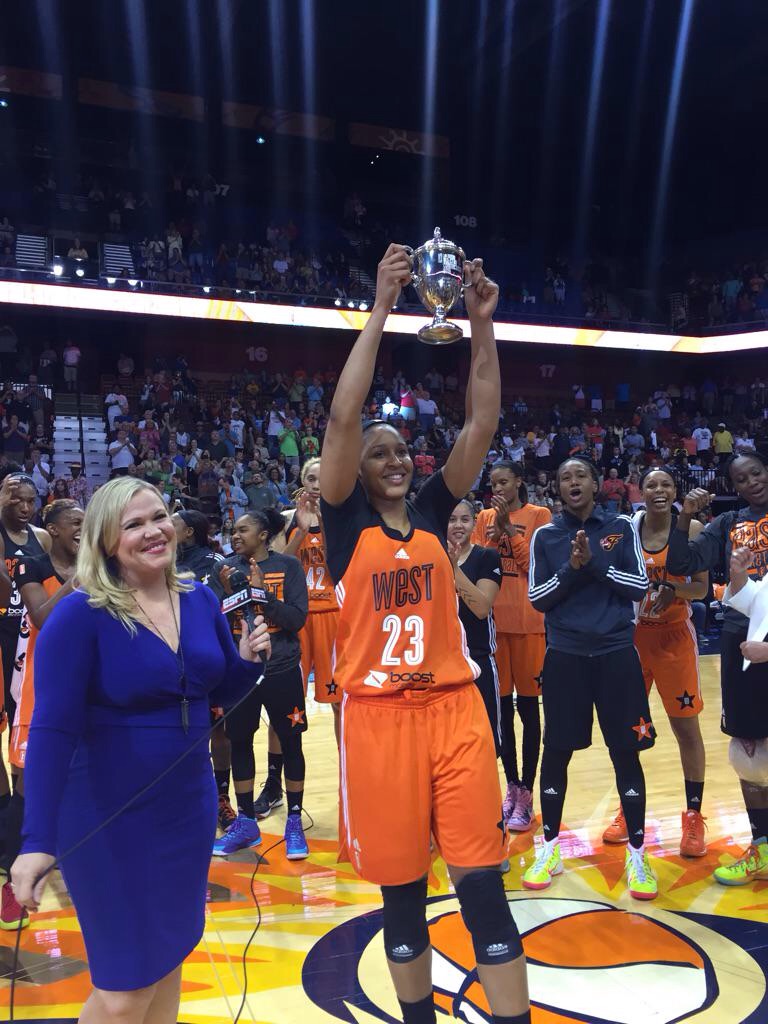 The second half of the 2015 WNBA season is here. Let’s take a moment to smell the roses, as the WNBA All-Star Game means the second half of the season is upon us. Among the All-Stars were 10 first-timers in this year’s game, the most since 2011. However, only one can be MVP. Minnesota Lynx forward Maya Moore put on another show in the state she knows pretty well; Connecticut.

Moore scored a record 30 points to lead the West to a 117-112 victory over the East. She had eight straight points in the final two minutes to turn a one-point deficit into a 113-106 advantage for the West. After a basket by the East cut it to a four-point game, Moore hit another deep 3-pointer to seal the victory.

“It was a blast of a game, those are moments that are fun for us,” said Moore, who starred at UConn and led the Huskies to an NCAA-record 90 straight wins and two national championships. “The game’s on the line, one-point game, let’s go out and play, see who wins.”

Moore is the first All-Star Game MVP for her team the Minnesota Lynx. The Lynx at the break are the best team at 12-4 overall and they just doubled their chances at a WNBA title. The Chicago Sky traded center Sylvia Fowles to the Lynx as part of a three-team deal. The Sky acquired Erika de Souza from Atlanta and also gave the Lynx their second-round pick in next year’s draft. The Dream received Damiris Dantas, Reshanda Gray and Minnesota’s first-round pick next season.

“We expect her to step in and be a great leader on and off the court,” he said. “She’s been one of the elite centers in the WNBA and will be a key addition to our championship-caliber roster.” Fowles sat out the first half of the year after requesting a trade from Chicago in the offseason. Without their 6-foot-5 star, the Sky (11-6) are second in the Eastern Conference. The two-time Olympian is averaging 15.7 points, 9.8 rebounds and three blocks for her career.

The Sky with the help of All-Stars Elena Delle Donne and Cappie Pondexter are not too bad without Fowles. The addition of de Souza cannot be overlooked. She is a bit older than Fowles, however she only adds to an already balanced offense. “Erika brings veteran leadership, a versatile skill-set and defensive intensity that will complement our existing core,” Sky coach and general manager Pokey Chatman said. “Her presence in the paint will be extremely valuable as we enter the second half of the season.” De Souza averaged 8.6 points and 7.5 rebounds this season for the Dream. The Brazilian center spent her last eight years in Atlanta.

Minnesota has been hit hard by injuries the last week. Seimone Augustus is out most likely until mid-August with a knee injury. Lindsay Whalen hurt her eye, ending her streak of 106 straight starts. Both players missed the All-Star Game.

Delle Donne, the Chicago Sky star who was the leading vote-getter this season, made her first All-Star appearance. She was voted in the last two years as a starter as well, but couldn’t play because of a concussion and recurrence of Lyme disease.

Back to notes of the game. Indiana star Tamika Catchings played in her final All-Star Game. She has played in a record 10 of them. She is planning to retire at the end of next season, and the WNBA doesn’t play All-Star games in Olympic years.

Phoenix Mercury center Brittney Griner had a dunk, a 3-pointer and goaltending call. Griner finished with 21 points for the West and three blocks. The defending champion Mercury are in second place in the West despite star Diana Taurasi sitting out the entire season.

The West is spread out with the Lynx leading the charge. The Los Angeles Sparks who sit last in the conference get Candace Parker back. The two-time MVP rested her body the first half of season. The Sparks are only 1½ games out of the playoffs.

The East will come down to a close finish. The New York Liberty are in first, but all six teams are within five games of them. Finishing first is no guarantee. Last season, Chicago advanced to the finals as the number four seed. The Fever were the last team to make it as the top seed in the East in 2009.

Don’t you just love the smell of those roses.

0 0 0 0
Previous : Carli Lloyd’s extraordinary performance inspires a future generation
Next : Ronda Rousey only improves her recipe for being the best of all time