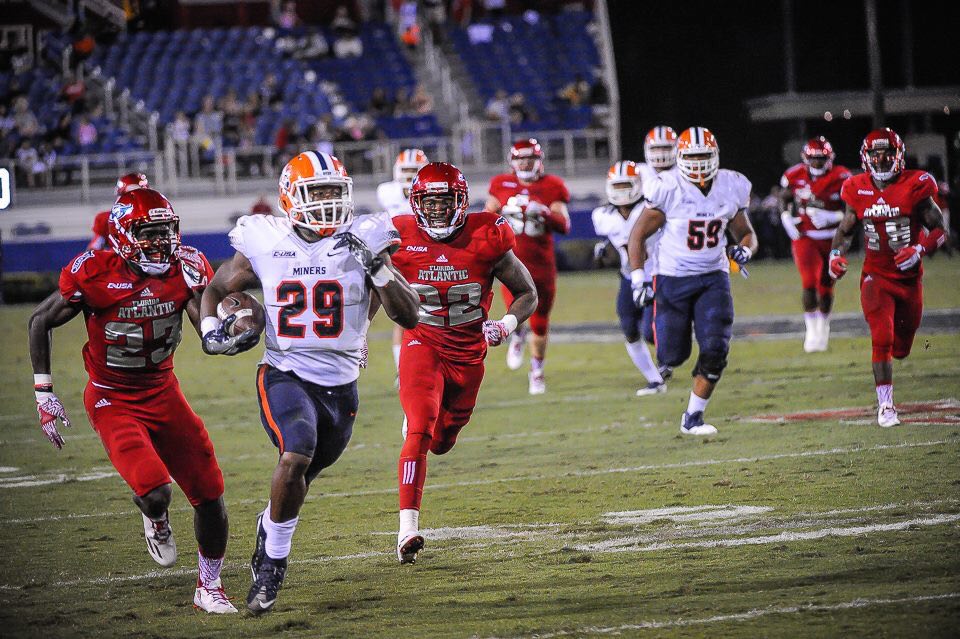 The Florida Atlantic Owls committed three turnovers, gave up 229 yards rushing to an individual runner and were down by as many as 11 points in a 35-31 comeback win hosting the UTEP Miners.

Quarterback Jason Driskel drove Florida Atlantic 96 yards with less than three minutes to go in the fourth to lead the Owls to a 35-31 come-from-behind victory over UTEP.

The Owls are coming off a 42-25 win over Rice in Houston behind Devin Singletary’s 252 rushing yards and three touchdowns. The yardage mark set a school single-game rushing record, one that was held by Alfred Morris (198 yards). They have won two in a row after losing seven straight this season.

“Feels great to win back-to-back,” Driskel stated. “We were not going to lose the game on that last drive.”

Aaron Jones had a record night for the Miners running for 229 yards to become UTEP’s all-time leading rusher, amassing 3,738 yards in his career to surpass John Harvey’s 3,576. Jones entered the game averaging 7.1 yards per carry. This game he averaged 8.5.

The Miners have had a rough 2016 campaign, going through a five-game losing streak themselves. And UTEP had a 31-20 lead going into the fourth however could not close it out.

The beat goes on as the Miners travel to Houston to play Rice who defeated Charlotte for its second win of the season. The Owls play host to Old Dominion who sits in second in the East division.

0 0 0 0
Previous : Chicago Cubs will be flying this W for a lifetime
Next : The Dolphins make me cry, week ten