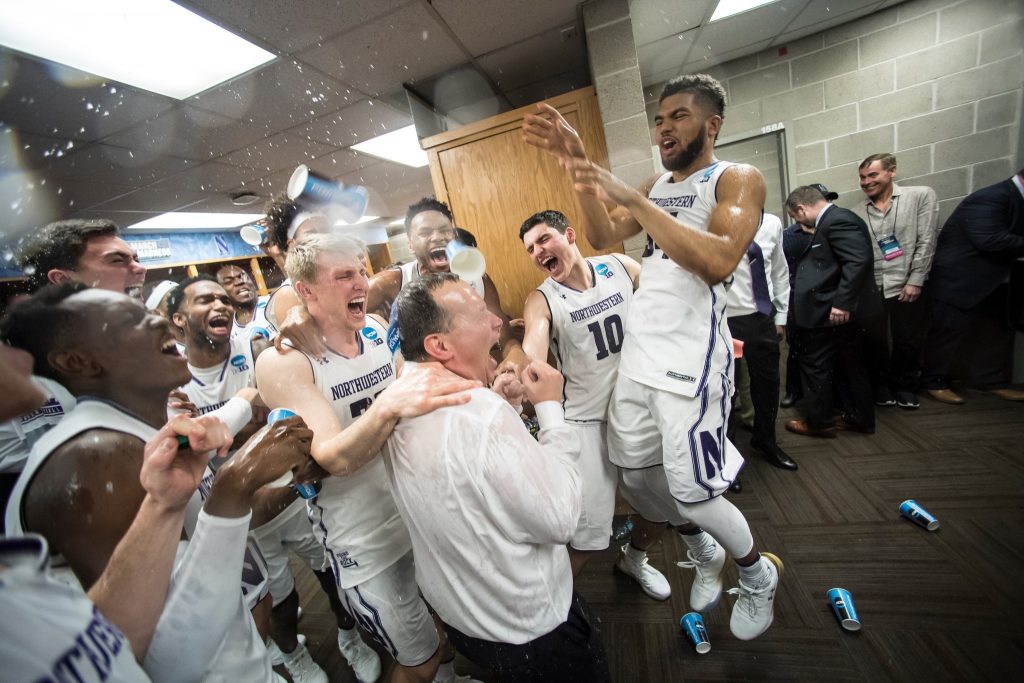 Is this a dream?

A dream that has come true?

Or was I in a dream in the past and just now I am realizing it.

My thoughts come back to me like yesterday. Walking into Welsh Ryan Arena for the first time, capacity 8,117. The atmosphere very spirited with purple everywhere. The added popcorn smell throughout the corridors, but the basketball venue gave the impression I am here to cover a high school game.

I was wrong. The Northwestern University Wildcats host basketball games here to opponents in the oldest Division I collegiate athletic conference, the Big Ten.

On the same land on the campus in Evanston, Illinois along the shore of Lake Michigan, just north of Chicago in April of 1939 the then named Pattern Gym, capacity 5,600 (after James A. Pattern, a wheat-market manipulator who’d paid for its construction in 1909) hosted Oregon’s win over Ohio State for the championship of the NCAA Tournament, which Northwestern was not invited.

Seventy-eight years later, with near miss and mostly no hope teams, Northwestern finally got invited to the dance they originally hosted.

The Wildcats did not just show up for the chips and the dip.

The Wildcats’ invitation in combination with the win sent a jolt to the heart of yours truly. Northwestern had been the only major-conference school to have never received a bid to the dance. When I was fortunate to cover the Wildcats while residing in Chicago, there were not just echoes of the team not making the tournament, but no chance of it happening before the season actually began at times. I never really counted the years but the fact that I am years younger than 78 and to actually witness it is two thumbs up.

Caoches who have sat on the pine for the Wildcats include, Arthur Lonborg, Tex Winter, Rick Byrdsong, and Bill Carmody. I covered the Wildcats on the back end of the Carmody years. He went 160-177 overall, 58-126 in conference play (I miss his dry humor). The Wildcats with pain and rejection did reach the NIT seven times, which alum considered the norm.

Legend has it Carmody passed on Frank Kaminsky who went on to be a Wooden Award winner, but John Shurna who became NU’s all-time leading scorer was not a bad find by Carmody.

Carmody coached the Wildcats to four straight NITs, from 2009 to 2012 making him the most successful coach in school history until an Illinois native replaced him.

Chris Collins who as a McDonalds All-American just 10 miles from the NU campus attended games at the invitation of then coach Bill Foster moreover hosted on unofficial visits by three-time all-conference center Evan Eschmeyer. However the losing in Evanston lured him away with powerhouses that would offer.

Three decades later, he is trying to sell recruits on a program that was still losing and still had not made the tournament. He sold some key players by sharing the Wildcats’ NCAA drought as an opportunity to be part of the first team to leave their mark. Those key players included Bryant McIntosh and Vic Law.

Collins separated himself from his predecessor Carmody and always had the Wildcats on the proverbial bubble by actually coaching them to a win over the Michigan Wolverines in a “Un-Northwestern” like way.

A full-court, Hail Mary inbounds pass from senior forward Nate Taphorn to Dererk Pardon for a buzzer-beating, game-winning layup against the Wolverines on March 1st at the high school built like gymnasium. Punch their ticket.

After winning their first tournament game in a questionable manner, their second game was one maybe coach Collins wishes he could have played back.

After not getting a goal-tending call, Collins stomped onto the court and drew a technical foul with 4:54 left in the game, sucking life out of a frenetic comeback that fell short in a 79-73 loss to top-seeded Gonzaga.

What a strange, heartbreaking way to close out the school’s first-ever trip to the NCAA Tournament.

Adding to the awkwardness: The NCAA released a statement acknowledging the call was missed, and Collins was sitting at the postgame news conference when he learned about it for the first time.

Nigel Williams-Goss finished with 20 points, eight rebounds and four assists to power Gonzaga (34-1), which led by as many as 22 points in the first half, then saw the lead dwindle to five with a little more than five minutes left.

The Wildcats made only 1 of 11 shots from 3-point range over the first 20 minutes vs Gonzaga. They finished the game with 26 fouls. Pardon fouled out and three players, Lindsey, Barret Benson and Gavin Skelly, finished with four each.

I woke up when it was over. But was it a dream? Did the dream come true or not? Okay, it is a dream in the past.

As the Wildcats made their tournament run, Welsh Ryan Arena was undergoing a transformation. Northwestern is putting more than 110 million dollars into upgrading and reconfiguring the high-school feel arena as well as building a much-needed practice facility.

I hope the popcorn smell is still there when I go back. That will answer the dream inquiries.