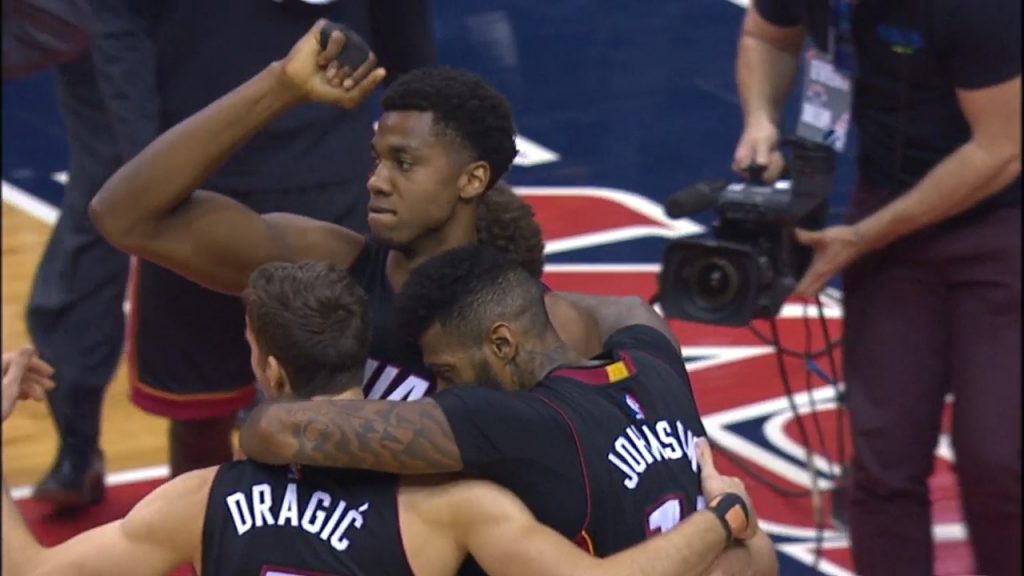 The Miami Heat ended their regular season with a 110-102 win over the Washington Wizards on Wednesday night. At the start of the 8 p.m. tip, the Heat needed a loss by the Indiana Pacers or the Chicago Bulls along with a win of their own to make the playoffs. Miami took care of its end of the bargain, but the Pacers and Bulls are marching on into the playoffs.

I mentioned in recent posts that Miami was winning but losing key games down the stretch of the season while not officially clinching and battling for a playoff spot. The Heat went 11-30 in their first 41 games, second-worst in the league. Then they turned on the porch lights and went 30-11 in the final 41 games, second-best in the Association.

Goran Dragic led Miami with 28 points, Hassan Whiteside scored 24 points and clinched the NBA rebound title with 18 rebounds and also recorded his 58th double-double, extending his franchise single-season record. Willie Reed scored 16 off the bench, Josh Richardson had 15 and James Johnson finished with 12 for the Heat.

The Heat became the first team in NBA history to be 19 games under .500 and end the season winning 41 games.

“The way these guys fought through all these injuries, all the ups and downs the roller coasters that we had, I don’t know if there is any other team that could’ve done what we accomplished,” Josh Richardson stated. “We call each other brothers because we really mean it.”

The Heat went 10-2 versus the Golden State Warriors, Houston Rockets, Cleveland Cavaliers and Washington Wizards. However, they lost three times to the Orlando Magic and twice to the New York Knicks and 76ers.

Dion Waiters (sprained left ankle) missed his 13th straight game. The Heat were 27-19 with him, 14-22 without him this season.

“We had nine guys who played in the D-league and fought every single day,” Willie Reed stated. “I love those guys. It should not be over.”

Washington started the season 2-8, and ended up with the No. 4 seed in the East.

“We lost tonight but we showed some good flashes out there,” Trey Burke said. “Everybody’s excited about the series coming up.”

Burke scored 27 while Sheldon McClellan had 18, Marcin Gortat added 16 and Otto Porter Jr. finished with 11 for Washington. The Wizards played without starters John Wall, Bradley Beal and Markieff Morris, all resting up for Game 1 of their first-round series against the Atlanta Hawks.

Miami went 4-0 against Washington and 16-14 against East playoff-bound teams.

Coincidently in the offseason, Dwyane Wade took his talents to Chicago to play for the Bulls. Chicago is the team that sent the Heat fishing. Both teams finished with identical records but Chicago held the tiebreaker by winning the season series 2-1.

From a franchise player leaving, to Chris Bosh being unable to play because of reoccurring blood clots, the Heat are still recovering from LeBron James leaving in the middle of the night. I witnessed this team shed some grown man tears in that locker room. A team with majority of names on the back of jerseys who do not make the top-selling list, but really wanted to make the playoffs not only to prove many wrong, but triumph like they won the NBA Finals.

Haslem, who is making four million this season, will be a free agent this summer. He has stated repeatedly he feels like he can still play moreover wants to be back.

0 0 0 0
Previous : In the Heat of the moment, Miami’s playoff chances may come down to the last second of another game
Next : Sergio Garcia won The Masters but not in a traditional way