The Miami Dolphins still make me cry. The NFL season ended a little more than three months ago and they still make me cry. Deep in the heart of the Major League Baseball season. The Miami Marlins are sinking fast early by the way. The support for my weekly column the “Dolphins make me cry” has been overwhelming and met with gratitude. The topic I have been getting the most questions about is the upcoming Miami Dolphins schedule. An NFL schedule is not easy for any team however Dolphins CEO Tom Garfinkel shared demand for Dolphins tickets in 2017 is high.

Ticket sales are evidence he’s right. The renewal rate is the highest it’s been since Garfinkel took over in 2013. He predicts all available season tickets will be gone by early August. The team anticipates to again sell out every game this season.

The tears may begin Week 1 against the Tampa Bay Buccaneers. The Dolphins will begin the season at home for just the second time since 2011. Opening on the road so often had become a sore subject for the franchise, which asked the league to address it this year. They close their regular season at home versus the Buffalo Bills on December 31st. The Dolphins got their wish.

The Dolphins have four games in primetime this upcoming season. As DJ Khaled would say… “Major.” This season the Dolphins will have four prime-time games. They will be playing the Raiders, Patriots, Panthers and Ravens in prime time.

Take note: The Dolphins will be on prime time in three consecutive weeks. They play at Baltimore on a Thursday night on Oct. 26, then host Oakland on “Sunday Night Football” on Nov. 5, then travel to Carolina for a Monday night game on Nov. 13. The other prime-time game will be the Dec. 11 matchup when the Dolphins host the Patriots on “Monday Night Football.”

The Dolphins were one of the most improved teams last year. They are back in the NFL’s “DMs.” Miami was an exciting team last year in making the playoffs. The networks like the Dolphins again coming off their 10-6 season.

There are players on this Dolphins team worth the draw to watch on TV. Wide receiver Jarvis Landry and running back Jay Ajayi to name a few. Landry predicted the Dolphins will sweep the Patriots this season. Miami should win many games this season. Stay tuned for predictions. 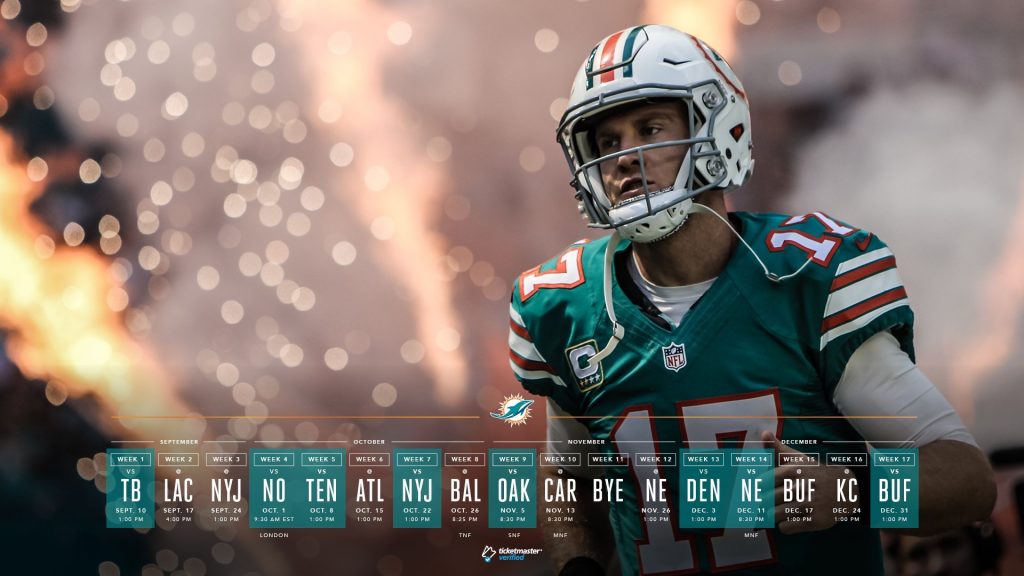 The AFC East is where the team will makes its money. The Dolphins swept the Bills and New York Jets in 2016, but were swept by the Patriots. Now we know when they will face their division rivals besides the Bills:

The Dolphins will visit the Patriots on Nov. 26 and as mentioned earlier, host New England on Dec. 11. They’ll travel to MetLife Stadium to play the Jets on Sept. 24 and host the Jets at Hard Rock on Oct. 22.

The Dolphins and Bills are going to enjoy late December together as they play one another in two of the final three weeks. The Dolphins will visit Buffalo on Dec. 17.

One game I’m personally excited to view is the Christmas Eve game in Kansas City. Will there be shades of the 1971 Christmas Day playoff between those two teams that remains to this day the NFL’s longest game? The game will be a true and difficult test for the Dolphins.

The Dolphins, who are having Phase III construction at Hard Rock Stadium, will be ready for the start of the NFL season and proof of success in the newly remodeled home will be with a win. Everything looks good when you win, especially a start to new season.