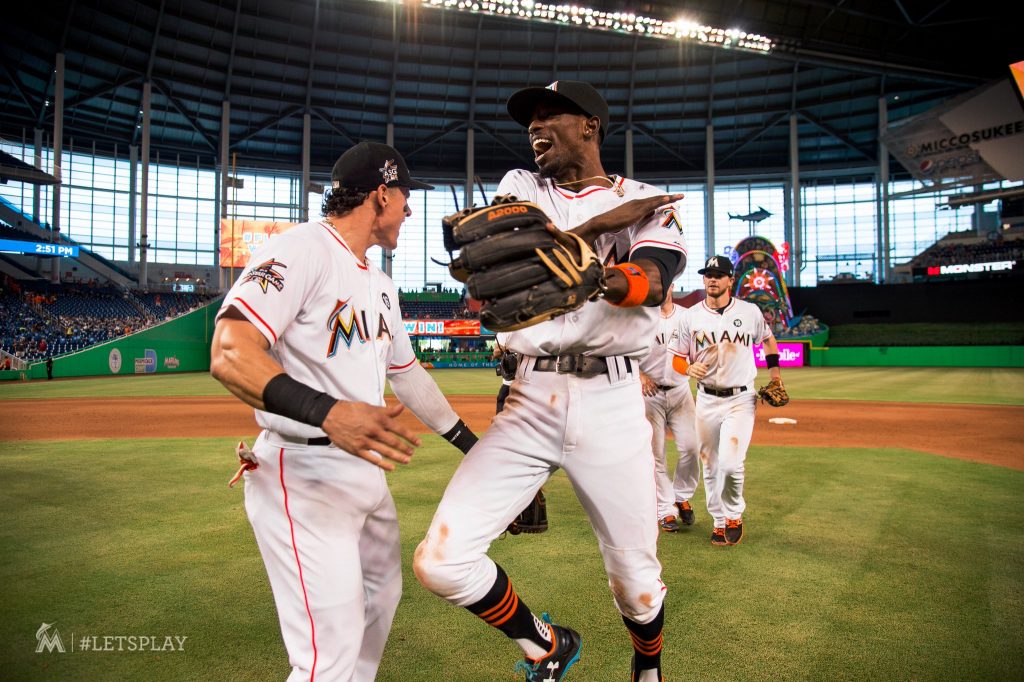 The Miami Marlins’ season has had its highs, its lows and “mids.” Leading up to the All-Star break played on their home field this year, the Marlins may be on to something big. The Marlins began a 10-game homestand in dramatic fashion.

After blowing leads and losing on the final pitch in back-to-back weekend games, the Marlins overcame an early six-run deficit, and Marcell Ozuna singled home the winning run with two outs in the ninth inning to beat the Washington Nationals 8-7 on Monday. Justin Bour helped reverse the script for Miami when he tied the game at six in the third with a grand slam, his 18th homer this season. Giancarlo Stanton also hit his 18th to make it 7-all in the seventh. The win was Miami’s 11th in its past 13 home games. They are slightly under .500, however the fish can see the light at the end of the tunnel before the All-Star break. Miami took the three-game series against the NL East leading Nationals, winning twice by a single run. Comebacks are joined with setbacks.

Braxton Garrett, the Marlins top prospect, will miss the rest of the 2017 season and potentially all of 2018 after undergoing Tommy John surgery. Garrett, a 19-year-old left-hander and the club’s top pick in the 2016 draft, was diagnosed with a partially torn ulnar collateral ligament in his elbow earlier this month. Garrett was the second Marlins minor leaguer to have Tommy John joining right-hander Jordan Holloway, the Marlins No. 14 prospect according to MLB Pipeline. Both had surgery performed by Dr. James Andrew.

I mentioned something big. The next opponent in the 10-game homestand is a four-game set against the visiting defending World Series champion Chicago Cubs. The Cubbies take their talents to Miami after a 2-1 loss against the San Diego Padres but won the series 2-1.

The last time these two teams met on the diamond, Marcell Ozuna hit his 15th homer, J.T. Realmuto went deep and the Marlins hung on to beat the Cubs 6-5 avoiding a three-game sweep and ending Chicago’s five-game winning streak.

In the latest win against the Nationals, Marlins backup catcher A.J. Ellis stymied Max Scherzer’s bid for the third no-hitter of his big-league career with an infield single in the eighth inning. The crowd of 22,659 for the 12:10 p.m. start included thousands of youngsters on camp day, and they gave the game a scream-filled soundtrack. Just adding to something big.

Both clubs will look to capitalize on mediocre starts before the All-Star break.

0 0 0 0
Previous : Kevin Durant finished first, making a business decision
Next : In the Heat of the moment, Miami with the 14th pick draft Kentucky’s Edrice “Bam” Adebayo