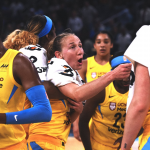 The Chicago Sky did not win the WNBA Finals or even make the playoffs this past season.

It was not a successful season for the 12-year-old franchise. The front office made that evident by releasing Amber Stocks of her duties.

The Sky has relieved Stocks of her duties as general manager and head coach, the team announced.

“The entire organization would like to thank Amber for the hard work and dedication that she has given to the Chicago Sky for the past two seasons,” said Sky President and CEO Adam Fox. “At this time, we felt a change was necessary for the 2019 season. We wish her nothing but the best in the future. Our search for a new coach will begin immediately.”

Stocks was named general manager and head coach of the Sky in December 2016, after serving as an assistant coach for the Los Angeles Sparks. In her first year with Chicago, Stocks finished the 2017 regular season with a record of 12-22. The Sky recently completed its 2018 campaign with a 13-21 record.

Collectively, the team is not where they need to be to compete at this moment, however individually Courtney Vandersloot left it all on the court for the Sky.

Vandersloot was not part of the MVP race; a case could have been made for the Most Improved Player from crucial stand out performances.

Vandersloot had so much to prove when drafted out of Gonzaga; If the Sky was a winning team this season she could have arguably been a candidate for Most Improved Player, it was a long shot. Here are some valuable highlights this season that help make my point.

Vandersloot has been with the Chicago Sky for her entire career, which she began as the third overall draft pick in 2011. She was voted into the All-Star Game her rookie season and made the All-Rookie Team, starting 26 games and finishing eleventh in assists per game. This past season, Vandersloot broke the single-season record for assists and finished off the season with 258 assists.

“I mean it’s pretty nice, Ticha Penicheiro set the bar pretty high. She is one of the best passers that the game has ever seen,” Vandersloot said. “I am lucky to have played with her here in Chicago, and I am lucky to try to fill those shoes if I can like I said it’s going to be pretty tough, it was tough, but when it comes down to it, it’s my teammates making shots. I get a lot of assists off them just making an open jumper.”

In a 91-88 win over the Minnesota Lynx, With ten assists, Vandersloot broke Penicheiro’s 18-year-old record for most assists (236) in a single season. In WNBA history, 200 assists have only been achieved 16 times. Penicheiro set the record in 30 games, Vandersloot broke her record in 28 games. It was Chicago’s first win in Minnesota since May 2010.

Vandersloot finished the game with 16 points and ten assists it was her eighth double-double of the season.

On July 20, 2018, Vandersloot became the seventh player in league history to post a triple-double, she scored 13 points along with ten rebounds and a career-high 15 assists in a 114-99 victory over the Dallas Wings.

Vandersloot set a franchise record with ten first-half assists and tied her team mark of 14 midway through the third quarter. Ticha Penicheiro holds the league record with 16, which she accomplished twice — in 1998 and 2002. Vandersloot’s career-high 15 assists were also the most recorded in a triple-double in WNBA history. Besides, it was the first-ever for the Chicago Sky franchise.

‘Hey, Sloot one more rebound,’ so, in a sense, yeah. You know, when you start forcing things that’s when it can get ugly.” Vandersloot said. “So, I just wanted to really stay true to the game and just do what it took to win the game. Like I said like of course, these things are fun don’t get me wrong, I’m humbled to be even you know the first this, the first that, but I really do just want to win the game.”

Vandersloot would break her record from last year for highest assist per game average in a season with 8.6 assists per game. She would also average a career-high in scoring. Despite these performances, the Sky missed out on the playoffs yet again; they finished 13-21.

She followed up her triple-double with a spurt of double-digit assists efforts that brought her to 50 assists across four games, the first time a WNBA player had ever achieved that feat, bringing down a legendary Penicheiro record of 46 assists in the same time frame.

The eight-year veteran made the All-WNBA second team by setting those WNBA records for assists per game (8.6) and total assists, along with averaging a career-high 12.5 points.

The Sky is the limit for Vandersloot, pun intended.