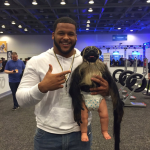 Welcome to Atlanta where the players play moreover the location of Super Bowl LIII.

The New England Patriots are back for the third straight year. The Los Angeles Rams are redeemed.

The greatness of quarterback Tom Brady and head coach Bill Belichick has been stamped in National Football League history. These two were cleared for liftoff on February 3, 2002, when coincidently the Patriots defeated the Greatest Show on Turf known at the time as the St. Louis Rams.

The banter continues for Brady and Belichick etching their names as arguably the greatest player and coach in NFL history. It is easy for me to pick the Patriots. However, I have to make a case for the underdog Rams winning the game in a moment.

The Patriots were once underdogs at one time; now they are the villains. Led by Brady who is preparing to make his ninth Super Bowl appearance the most all-time and tied for most Super Bowl wins with five, making them the greatest dynasty in NFL history.

Sean McVay who will be the youngest to ever coach in the Super Bowl redeemed the Rams into a contender overnight.

On Sunday, 17 years to the day these two franchises played each other and took different paths; the Rams have their chance for payback. Brady, of course, is the only player left on either team’s roster from that Super Bowl in New Orleans. (Jared Goff, the opposing starter this Sunday, was 7.)

The Rams have a chance; it starts with Wade Phillips, their defense coordinator moreover their defensive line. It sounds simple, defense stop Brady, however, no one is achieving it. The Patriots enter this Super Bowl averaging 39 points per game this postseason, and if you haven’t noticed, opposing defenses help Brady keep his jersey clean. The Chargers and Chiefs combined for 90 sacks in the regular season, but they failed to sack Brady even once across 90 combined pass plays in the postseason.

Phillips’ secret? Aaron Donald. Wait, he needs Donald so Ndamukong Suh can be his secret weapon and possibly the MVP for the Rams to win. Donald just finished the regular season with 20.5 sacks and 41 knockdowns, which might have been the most dominant pass-rushing season from an interior defensive lineman in the NFL history. Nobody else in football came within four sacks or six knockdowns of the reigning Defensive Player of the Year, and there will be no surprise if he is given the title for a second straight year.

Belichick will take away the best player or most important weapon away forcing the other players to beat him. That is where Suh enters stage left. He will most likely get single blocked, and he needs to cause havoc. Suh finished the year with 4.5 sacks. Suh was a 4-3 defensive tackle for years with the Lions and Dolphins, but with the presence of Donald on the interior, Suh does his pass-rushing work from left defensive end. If he impacts the game dramatically as a pass-rusher, it seems likely that Suh would be matching up against Pats right tackle Marcus Cannon.

There are 11 players on each side of the ball, however, if the Rams do not stop one, Brady. The final score will be 26-20, Patriots win.