New Orleans, LA – The Naismith Memorial Basketball Hall of Fame today announced the 13 honorees in the Class of 2022 to be celebrated September 9-10 during this year’s Enshrinement festivities in Springfield, Massachusetts. The Class Announcement was made in New Orleans, Louisiana, the site of the 2022 NCAA Men’s Final Four and was televised live on ESPN2. 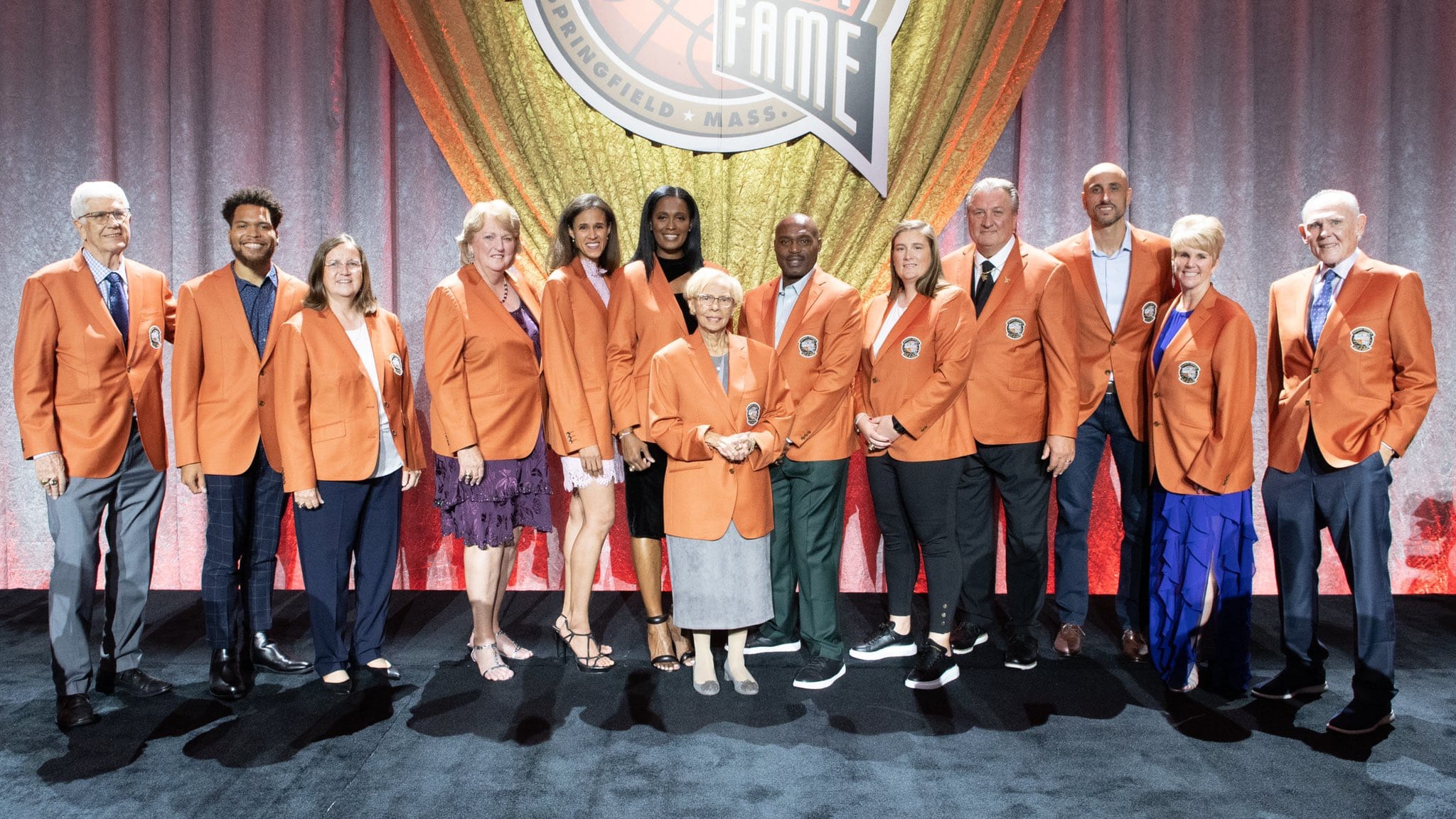 Distinguished committees focused on preserving all areas from the game also selected five directly elected enshrines. They include Lou Hudson from the Veterans Committee, Larry Costello and Del Harris from the Contributor Committee, Theresa Shank-Grentz from the Women’s Veterans Committee and Radivoj Korac from the International Committee.

“Year after year, we are constantly reminded of the extraordinary and transcendent efforts of the remarkable men and women who have impacted the game of basketball from a global perspective,” said John L. Doleva, President and CEO of the Naismith Memorial Basketball Hall of Fame. “The Class of 2022 is ripe with individuals who have had a significant historical impact on the game we love. We congratulate and thank them for everything they’ve done to better the sport and look forward to honoring them during Enshrinement this fall.”

To be elected, North American and Women’s Committee finalists must receive 18 of 24 votes from the Honors Committee for election into the Naismith Memorial Basketball Hall of Fame. Direct elect committees are incorporated into the election process to maintain a strong focus on keeping history on the forefront of the voting procedures and to preserve a balance between two eras of basketball.

The Class of 2022 will be enshrined during festivities in Springfield, Mass., the Birthplace of Basketball, on September 9-10, 2022. Ticket packages to the 2022 Enshrinement Ceremony and all the Enshrinement events are on sale now and available at Hoophall.com/events/enshrinement-2022/.

THE NAISMITH MEMORIAL BASKETBALL HALL OF FAME CLASS OF 2022

HUGH EVANS [Referee] – Evans served as an NBA Official for 28 consecutive years (1973-2001), tallying over 1,900 regular season games, 170 playoff games, 35 NBA Finals games and four NBA All-Star Games. Following his on-court officiating career, Evans worked as the NBA Assistant Supervisor of Officials (2001-03). He is a recipient of the Each One Teach One Community Service Award and is enshrined in the New York City Basketball Hall of Fame as well as the North Carolina A&T Hall of Fame.

TIM HARDAWAY [Player] – A 2000 Olympic Gold Medalist, Hardaway played 13 NBA seasons scoring a total of 15,373 points while averaging more than 20 points per game for four consecutive seasons. He is the 1990 recipient of the Jack McMahon Award for most inspirational player and a 1997 All-NBA First Team selection. He currently ranks 18th in NBA history with 7,095 career assists. The Chicago native was a member of the men’s basketball team at the University of Texas at El Paso (1985-1989) and is known for making his signature move – the “UTEP Two-step” – famous in 1989, the same year he was named WAC Player of the Year.

The Dolphins make me cry, Rest in Power Jason Jenkins

LOU HUDSON [Player] – Recognized posthumously, Hudson was a six-time NBA All-Star (1969-1974) and averaged 20.2 points and 4.4 rebounds per game in 13 NBA seasons. The athletic shooting guard played 11 seasons with the St. Louis/Atlanta Hawks (1966-1977) and has his jersey No. 23 retired by the franchise. A native of Greensboro, North Carolina, Hudson attended the University of Minnesota where he was part of the first African American recruiting class in school history and went on to receive All-American honors and had his jersey No. 14 retired. He is also a member of the Minnesota Hall of Fame as well as the North Carolina Hall of Fame.

LARRY COSTELLO [Contributor] – Recognized posthumously, Costello was a six-time NBA All-Star (1958-1962, 1965), a member of the 1967 World Champion Philadelphia 76ers and coached the Milwaukee Bucks to the 1971 NBA title, as well as a Finals appearance in 1974. As a player, he averaged 12.2 points and 4.9 assists per game over 12 NBA seasons, earning All-NBA Second Team in 1961. Known as the last two-handed set shooter, the point guard led the NBA in free throw percentage twice (.881 in 1963; .877 in 1965). As a coach, he was one of the first people to employ a working, accountable assistant coach and employ videotape to analyze the game. He also traveled extensively for the U.S. State Department, lecturing in Germany, Africa, Asia and Europe. Costello is also a member of the Niagara University Hall of Fame, Syracuse Sports Hall of Fame, Greater Buffalo Hall of Fame and the New York State Hall of Fame.

DEL HARRIS [Contributor] –Harris has dedicated his life to basketball, serving as a coach, mentor and tireless advocate for the game. In his more than 50-year coaching career, he coached every level of the sport, ranging from junior high hoops to the NBA. Harris is deeply respected by players, coaches and executives alike, having earned the Jerry Colangelo Award for Leadership and Character in 2010, the Coach John Wooden “Keys to Excellence” Award in 2014 and the Basketball Hall of Fame’s John W. Bunn Lifetime Achievement Award in 2019. For over 35 years, he served as both a treasured assistant coach and head coach of several franchises including the Houston Rockets, Milwaukee Bucks, Los Angeles Lakers, Dallas Mavericks, Chicago Bulls, and New Jersey Nets. Harris led the Houston Rockers to the NBA Finals in 1981 and was recognized as the NBA Coach of the Year in 1995 while at the helm of the Los Angeles Lakers. Harris currently serves as Vice President of the Mavericks G League affiliate, the Texas Legends, while providing game analysis for the Mavericks on Fox Sports Southwest. He is also a member of the NAIA Basketball Hall of Fame and Indiana Basketball Hall of Fame.

THERESA SHANK-GRENTZ [Player] – Shank-Grentz was a member of three consecutive AIAW National Championship teams and was a three-time All-American at Immaculata University from 1972-74. The 1974 title game was the first ever live coverage of a women’s basketball game in the United States. She scored over 1,000 career points at Immaculata, including a record 104 points and 76 rebounds in the 1973 AIAW Tournament. Shank-Grentz was named the AMF Collegiate Player of the Year in 1974 and has her jersey No. 12 retired by the university. She also scored over 1,200 points as a prep player at Cardinal O’Hara High School in Springfield, PA, and was a three-time All-Conference Philadelphia Catholic League.

RADIVOJ KORAC  [Player] – Recognized posthumously, Korac is known as Yugoslavia’s first basketball superstar, helping lead the country to the silver medal at the 1968 Olympics after leading all players in averaging 23.6 points per game during the Games. He also led Yugoslavia to silver medals in FIBA World Cup play in 1963 and 1967. He still holds the EuroLeague’s all-time single-game scoring record with 99 points in a game vs. Alviks during the 1964-65 season. Korac tragically passed away in a car accident in 1969 at the age of 30 and has been remembered as the namesake of FIBA’s Korac Cup in 1971 and Serbia’s Korac Cup in 2002. He was named one of FIBA’s Greatest Players in 1991, was enshrined in the FIBA Hall of Fame in 2007 and was named one of the 50 Greatest EuroLeague Contributors in 2008.