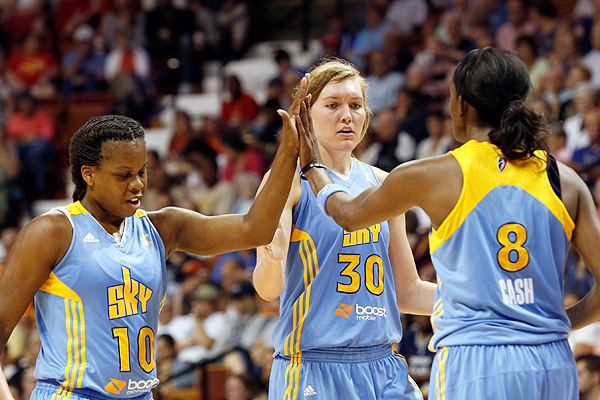 The Chicago Sky have clinched their first playoff spot in franchise history with an 82-64 win over the New York Liberty. The rest of the WNBA better take notice. The Sky own a commanding lead over the Atlanta Dream for the number one seed in the East, a lead many are echoing that can spark a deep playoff run.

The Sky (19-8) entered their eighth year as the only active franchise in the WNBA, NBA, MLB, NHL or NFL without a postseason appearance. “It feels good. Just thinking about from the first training camp, into the first preseason game just knowing what you have around you,” Sylvia Fowles said. The league’s leading rebounder scored 14 points to lead Chicago and added seven boards.

The Sky outscored the Liberty 29-12 in the third quarter to take command of the game before inserting the backup players for the entire fourth quarter. Elena Delle Donne added 11 points for the Sky who swept the five-game season series from the Liberty. The Sky have won four straight and six of seven.

Plenette Pierson led New York (10-16) with a season-high 25 points. The Liberty have lost three straight to fall two games behind Washington and Indiana for the final playoff spot in the East. “We have many games remaining we can win down the stretch, if we don’t we are going to be in trouble,” Liberty coach Bill Laimbeer stated. New York’s leading scorer, Cappie Pondexter did not score until hitting a free throw with less than 40 seconds left in the first half and finished with a season-low three points on 1-for-8 shooting.

Chicago has a 5:30 a.m. flight to Atlanta to face the Dream. With a win they can take one step toward securing home-court advantage in the East. The Sky are 11-2 at home and are keeping pace with the Minnesota Lynx for the best overall record in the league.