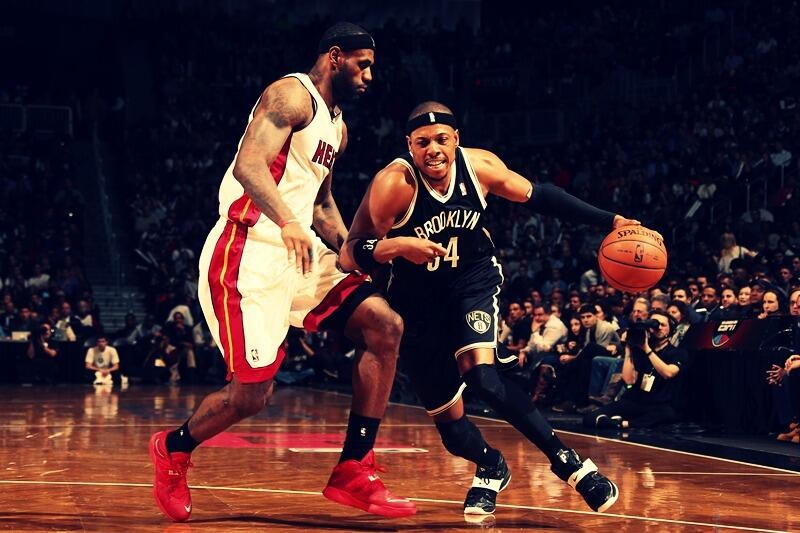 (Sigh). Where do I begin with this one? The Brooklyn Nets beat the Miami Heat 88-87 Tuesday night sweeping the NBA champs in four games for the first time in 11 years. Mason Plumlee denied LeBron James’ dunk attempt at the rim with two seconds left, in person and on tape it was a debated block at the horn.

With the Heat down and in transition and time running out, I witnessed Rashard Lewis get a pass to James under the basket, LeBron rising, Plumlee rising, no whistle, game over. If it looks like a foul, talks like a foul, is it a foul? Heat head coach Erik Spoelstra thought it was a foul. James thought it was a foul. “It only matters if three people thought it was foul,” Plumlee stated in reference to the NBA referees on the court. The Nets are the first team to sweep a LeBron James team in a season series of four-or-more games.

James had 29 points, 10 rebounds and six assists for the Heat, who got 12 points from Chris Bosh and 10 from Norris Cole. “He grabbed my right hand,” James said. “He didn’t do it on purpose, but he got my right hand.” Miami’s Dwyane Wade missed his seventh straight game nursing his left hamstring, his 26th absence this season for the Heat.

A feeling of nostalgia came over me during this game. Alonzo Mourning, the Heat player-turned-executive whose induction into the Basketball Hall of Fame was announced Monday, received a video tribute and loud ovation during the first half. I remember watching this great NBA player growing up in my hometown of Miami.

Joe Johnson scored 19 points, reserve Marcus Thornton had 16 and Paul Pierce scored 14 for the Nets. The Heat play a back-to-back as they visit the Memphis Grizzlies who have won 11 in a row at home. The Indiana Pacers visit the Heat Friday night for the battle of beast of the East as the regular season comes to an end next week.