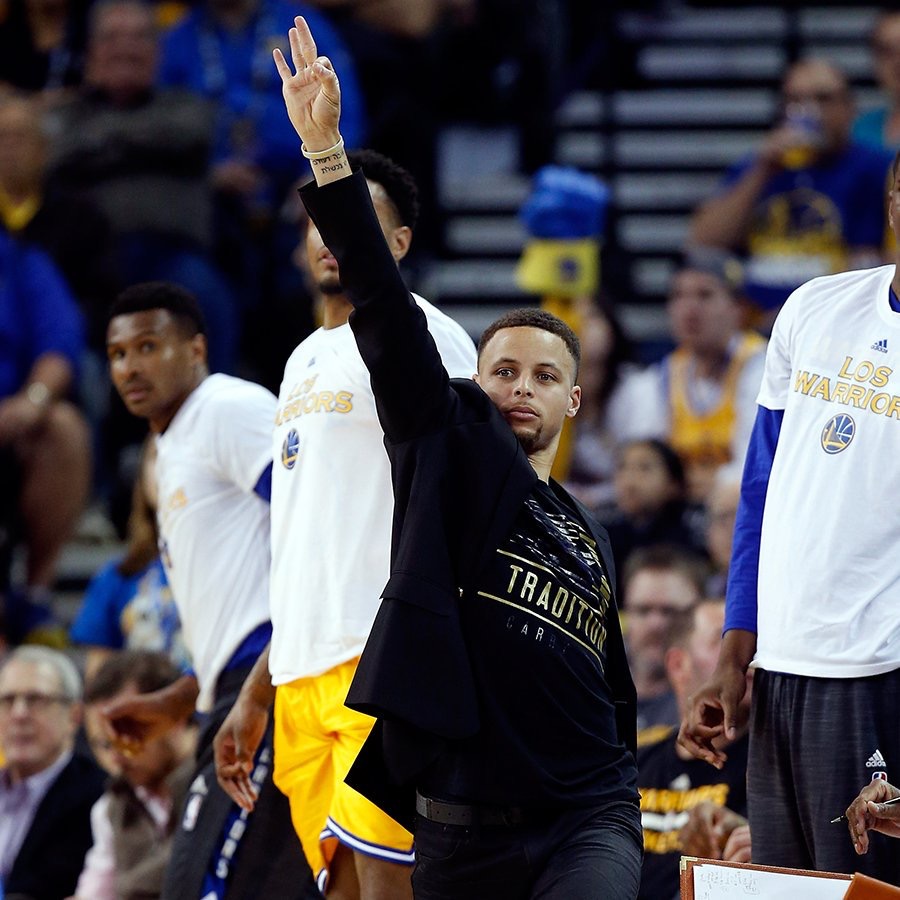 The Golden State Warriors defeated the Oklahoma City Thunder on the road after a game winning 3-pointer from reigning MVP Stephen Curry in overtime.

Wait. Let me try this again.

Stephen Curry connected on a 3-pointer from beyond 30 feet with 0.6 seconds left in overtime, which gave the Golden State Warriors a 121-118 win over the Oklahoma City Thunder. Curry’s shot will go down as the play of the NBA season and year. The game will be one of the greatest of all-time.

“There are no words,” Thunder assistant coach Maurice Cheeks said.

This NBA game had it all including suspense.

The Thunder came out firing in the first half taking a 57-46 lead at halftime into the locker room. The Warriors counted on their scoring to get them back in however the Twitterverse went into panic. Curry, the league’s scoring leader missed about six minutes of the third quarter with a left ankle injury. He drove to the basket and rolled his ankle before Thunder guard Russell Westbrook stepped on it. Curry would return and the show went on.

The Warriors returned the favor outscoring the Thunder 57-46 in the second half. The game went into overtime however there are two “are you kidding” moments that stand above the rest in regulation. It happened on one play; Kevin Durant’s turnover and foul on Andre Iguodala at the end of regulation that sent the game to overtime.

Durant led the Thunder with 37 points, but he fouled out in the first minute of overtime. Oklahoma City still had the game in its favor to win. “I’m going home and have myself a nice meal with a glass of wine and I will be fine,” Durant stated. The Thunder played one of their better defensive games of the season and shut down the other Warriors players from beyond the 3-point line.

I pause here to share with you, my friend JP was visiting Miami, Florida. At the Clevelander on South Beach, everyone had their eyes glued to the game on a Saturday night!

Curry with the possession dribbled into the frontcourt with the Thunder defense backpedaling. With NBA fans, Warrior fans and spectators on Ocean Drive in Miami, Curry connected on a 3-pointer from beyond 30 feet. “Just literally, you’ve got a sense of — I’ve shot the shot plenty of times, you’re coming across half court and timing up your dribbles, and you want to shoot before the defense goes in. And that was pretty much my only thought,” Curry stated.

“Everybody in this locker room, we’ve seen him practice from that range every day,” Warriors guard Klay Thompson said. “He’s got the greatest range I’ve ever seen. He makes it look so effortless.”

Curry finished with 46 points, and his winning shot was his 12th 3-pointer, tying the NBA single-game record (Kobe Bryant and Donyell Marshall). “I did not know I tied the record for most 3s in a game; thankfully the last one went in,” Curry said. Curry also broke his own NBA record for 3s in a season, leaving the new mark at 288.

Golden State, with the best 58-game record in NBA history at 53-5, became the first team this season to clinch a playoff berth. “The beauty of our team is when we leave the locker room we are still united and ready to compete,” Warriors forward Draymond Green said. The Warriors are also the first team since the 1987-88 Los Angeles Lakers to clinch a playoff spot in February.

0 0 0 0
Previous : Miami lost to Golden State but things will only heat up
Next : Never question LeBron’s legacy again