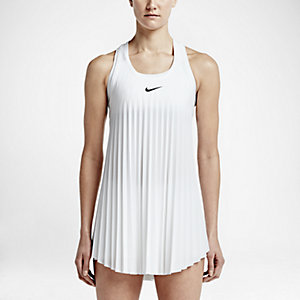 When it comes to dress code at Wimbledon, it is simple. We want white. Nike is a brand with innovation, they push all the buttons. It has been evident in this summer’s Wimbledon tennis championships, particularly on the women’s side.

Nike dropped Maria Sharapova, who is serving a two-year doping suspension. Serena Williams comes in having not won a major when she was a US Open win from completing the calendar grand slam last year.

It is what Nike’s high profile tennis player Williams and other female Nike women are wearing at the All England Club that make you say…hmm.

The women are wearing dresses that draw comparisons to a short, flimsy piece of nightwear, something more appropriate for use behind closed doors than on a tennis court. If you stare long enough innocent lingerie is a good comparison, but will have the Wimbledon fashion police cringing.

That is only the appearance however a little gust of wind across the pond can make the uniform even more revealing. Apparently, players were forced to alter the dress themselves during Wimbledon qualifying last week in nearby Roehampton. The UK’s Daily Mail reported that Nike had recalled the outfits following complaints.

The newspaper said Nike had sent an email to players and agents that read: “We need to make a small change to your dresses per Wimbledon rules. Could you please bring them by the Nike Wimbledon house.”

Deep down in my heart there are more pressing problems in the world. This is the last of any one’s worries but this was someone’s idea. Fixes to the attire that have been featured during the tournament proper include sewing the sides up so they are less revealing.

Serena Williams, the G.O.A.T. with 21 majors; Williams wears a dress designed specifically for her that compliments her beauty well. “I think Nike has been really good about making things, designing with me to make things that look good, play good essentially,” Williams told reporters. “That’s kind of our motto. Obviously we want it to work. This works really well, too.”

In a news release distributed before the tournament, the company touted the dress: “NikeCourt female team athletes will compete in the one-piece NikeCourt Premier Slam Dress, which represents a departure from the skirt-top combinations worn in previous Grand Slams.”

Again pushing all the buttons, but sometimes you have to work with what you have. Broaden the customization of the designs. For instance, Serena stands alone as the world’s number one, but give the opponent with a lesser known name a chance to chase a tennis ball around without shots of her belly button trending on social media. Give her the option to take a loss in white with pride. One last thing, the NikeCourt Premier Slam Dress is sold out on nike.com.