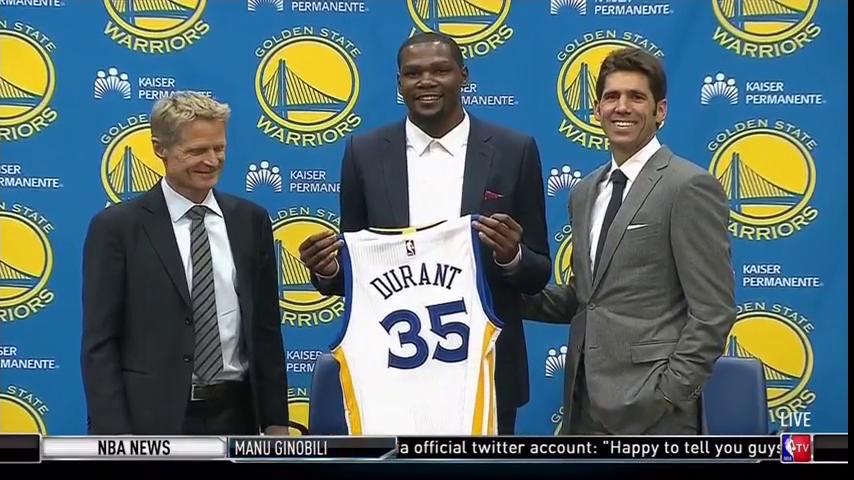 Pre-Independence Day 2016, my question to league sources, writers and current NBA players: What do you think he is going to do? The consensus answer: He is staying. On the federal holiday commemorating the adoption of the Declaration of Independence, he made his decision: He is leaving to play for the Golden State Warriors. The consensus reaction: I can’t believe he is leaving. The day after July 4th: Coping begins for one team and the other became the “Splash family”.

Free agent Kevin Durant, the player who put the Oklahoma City Thunder on a global scale, announced his decision on the Player’s Tribune which provides daily sports conversation and publishes first-person stories directly from athletes.

“Moving out of my comfort zone to a new city and community which offers the greatest potential for my contribution and personal growth. With this in mind, I have decided that I am going to join the Golden State Warriors,” Durant stated. The 2014 Most Valuable Player is titled a deputy publisher for the website that was founded by former Major League Baseball player Derek Jeter.

Take a step back and add this up. Fourth of July weekend, Durant, a Washington D.C native, hosted teams in an area that features some of the most expensive and luxurious residential properties in the U.S. and made the announcement on a website where celebrities drive us to purposefully.

This all became a stage of fireworks that were ineffective. Come on, the Warriors or stay. Earlier I mentioned the consensus on him staying furthermore the consensus for the team to go: Warriors. I did not need another buildup to what may have been a decision made on the first day since the Warriors were one of the first teams to meet face to face with the seven-time NBA All-Star. Scratch the money, the Warriors this past NBA season were the rock band everyone paid to see. Overall it is still shocking.

The explosion in all of this: Oklahoma City. They love their Thunder. The team relocated from Seattle plus were grateful for the gift and the large size bow, Kevin Durant. He donated $1 million to the Red Cross when a tornado ravaged an Oklahoma City suburb. He famously thanked every single one of his teammates during his memorable MVP speech including naming his mother the actual MVP. I can go on and on. Better yet, I think they would have applauded if he went back to his hometown Washington D.C. out of love. This will be a gradual way up for Thunder fans however the city will feel the economic shift from him leaving.

In a tweet six years ago, Durant seemed to publicly criticize LeBron James for his equally stunning decision to sign with the Miami Heat and form one of the greatest collections of talent in NBA history with Dwyane Wade and Chris Bosh. He may have had a change of heart. “It really pains me to know that I will disappoint so many people with this choice, but I believe I am doing what I feel is the right thing at this point in my life and my playing career,” Durant stated.

Kevin Durant’s decision to sign with the Golden State Warriors and form one of the greatest collections of talent in NBA history stunned the league however it is his free independent right. In the end, Durant chose the best basketball team moreover the team that can dethrone LeBron James. The pressure on winning a title will not be on him solely instead the hands down favorite to win it all, the splash family.

0 0 0 0
Previous : Dresses flying above the waistline at Wimbledon
Next : Miami Heat and Dwyane Wade became Heartless