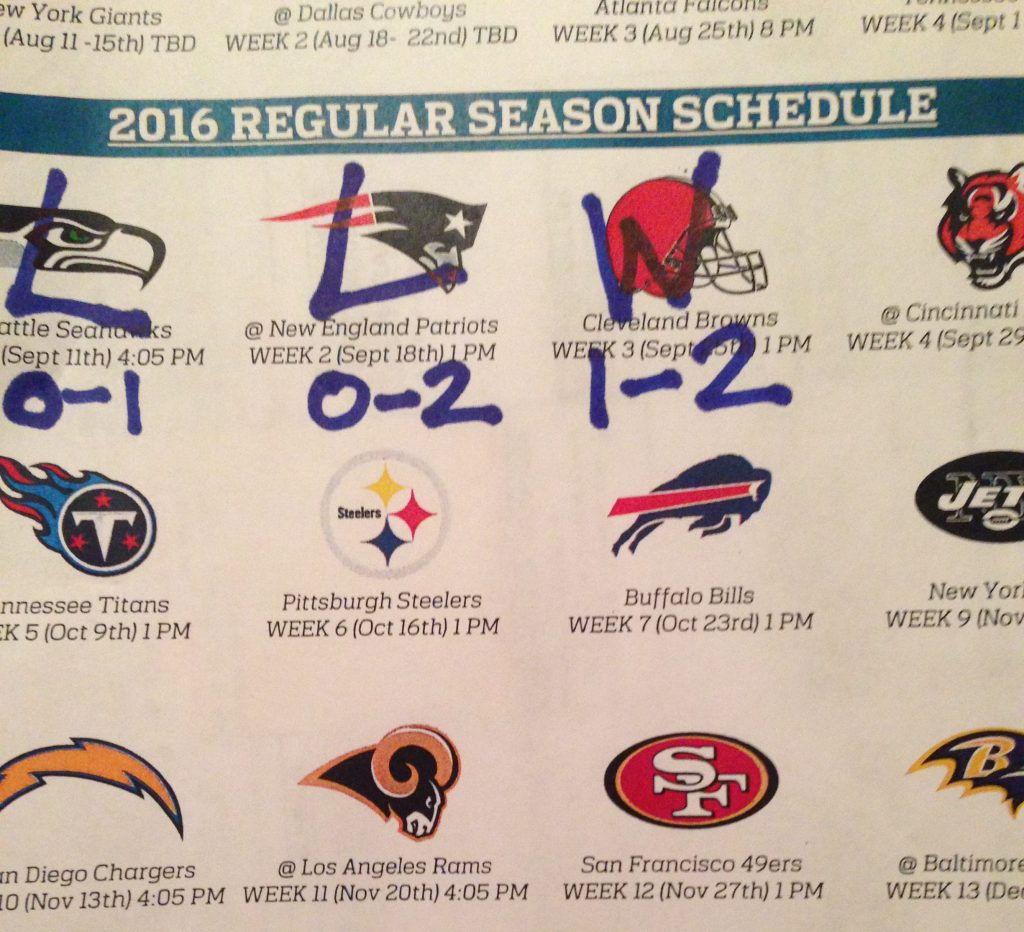 The Miami Dolphins got their first win of the season. Barely.

I am beginning to giggle like a senseless person watching the Dolphins play. Is this a good thing or bad thing?

Jay Ajayi scored on an 11-yard run with 8:26 left in overtime, and the Dolphins escaped with a 30-24 win over the Cleveland Browns on Sunday, the first victory for first-year head coach Adam Gase.

I cannot make this up. My own Haitian father who immigrated to Miami in the late 70s would walk into the room questioning each score change.

Miami, in the home opener, had a touchdown lead in the first quarter; the Browns entered the locker room at the half with a 13-10 advantage. With the game tied at 24 apiece, both teams illustrated why they are winless coming in. Game tied at 24 with less than 25 seconds to play. Miami hoping to get in field goal range, fumbled the ball putting the Browns in field goal range.

Cody Parkey, who was signed Saturday after Patrick Murray was hurt the day before in practice, missed three field goals for Cleveland, including a 46-yarder as time expired in regulation. Parkey went wide left. The fans were treated to overtime in the newly renovated Hard Rock Stadium.

“I know everybody will say it came down to the field goals, but I’m not going to put that kind of pressure on Cody,” Browns coach Hue Jackson said. “Cody just got off a plane with us and I don’t know him as well as I know this chair right now.”

Ajayi’s game-winner came one play after Miami quarterback Ryan Tannehill found a wide-open Jarvis Landry for a 32-yard gain, as the Dolphins avoided what would be their first 0-3 start since 2011.

Patriots coach Bill Belichick offered a memorable “We’re on to Cincinnati” series of quotes in October 2014, not wanting to answer questions about Tom Brady after a bad loss to Kansas City. Gase, whose club goes to Cincinnati on Thursday, channeled some Belichick on Sunday. “We’re moving on to Cincinnati,” Gase said.

The Browns who may be down to wide receiver Terrell Pryor as their starting quarterback will face Washington on the road.

0 0 0 0
Previous : Chicago Sky advances to a best-of-five WNBA semifinal over Atlanta Dream
Next : Sky could not slow down Parker and Ogwumike in semifinal opener