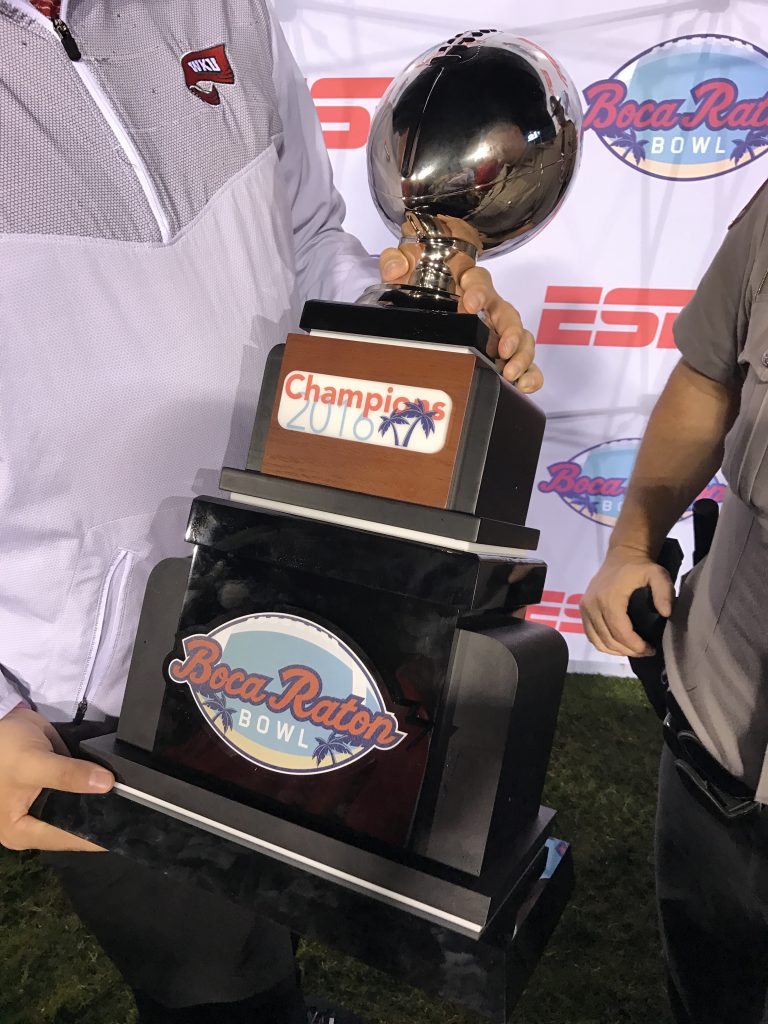 What is the new song the kids are singing these days? It goes, “No one can stop me I am all the way up.” The Memphis Tigers and Western Kentucky University Hilltoppers both came in to the Boca Raton Bowl believing no one can stop them offensively. The Hilltoppers, favored coming into the game, stood to their own belief.

Western Kentucky senior running back Anthony Wales was the captain of the ship leading the offense with 329 total yards including 245 yards on the ground and three touchdowns in a 51-31 win over Memphis. It was Western Kentucky’s third straight bowl game win. “When he runs the ball, it ignites the defense, it inspires us to play harder. I am so proud of him and his effort every time he falls forward,” coach Nick Holt stated. Wales was named Most Valuable Player on offense. Wales’ 329 yards are the most in Boca Bowl history.

The award could have been handed out to so many offensive players especially since the second-leading rusher was NFL prospect 300-pound left tackle Forrest Lamp who was part of a trick play scoring on a nine-yard catch-and-run.

The Hilltoppers totaled 598 yards, the most in Boca Bowl history. It was the second game in a row Western Kentucky had a 300-yard passer, 200-yard rusher and 100-yard receiver. “At a point in the season we were 3-3 and there’s two ways the season can go-up or down,” Hilltoppers quarterback Mike White stated. All the veterans, from an offensive standpoint, came together and decided it’s not going down, it’s going up.” White threw for 336 yards and three touchdowns.

The Tigers punched back. The Hilltoppers punched back harder. Memphis finished with 491 total offensive yards but had three turnovers in a losing effort. “They did an outstanding job. We knew they had some experienced guys,” Tigers coach Mike Norvell stated. “Their running back ran hard, their offensive line we knew would be one of the best we played and they played up to that level tonight.” Of the total offensive yards, only 73 were rushing yards compared to the 262 the Hilltoppers were able to run on them. Memphis lost a bowl game for the second consecutive year.

Holt, who was filling in after coach Jeff Brohm left this month to become the new coach at Purdue, may have coached his last game for now. Notre Dame offensive coordinator Mike Sanford was chosen over Holt as Brohm’s replacement next season, and attended the game up in the nice suites.