“We hear from customers how Apple Watch helps them stay connected with loved ones, be more active, and live healthier lives,” said Jeff Williams, Apple’s chief operating officer. “Apple Watch Series 8 reinforces our commitment in these areas with the addition of pioneering technology, while Apple Watch SE brings advanced core features at a new starting price. Powered by watchOS 9, the best smartwatches deliver more capabilities than ever before.” 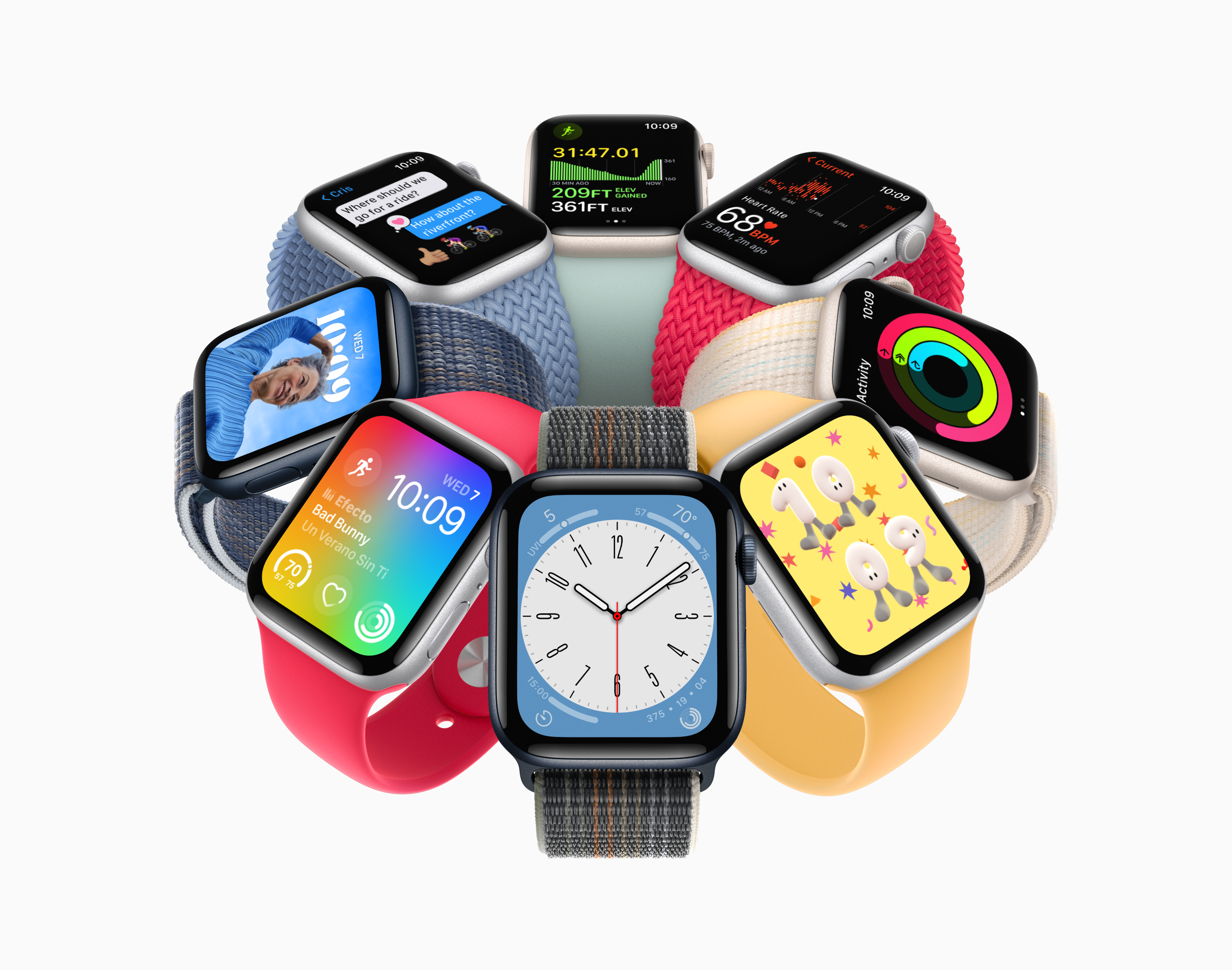 The menstrual cycle is an important marker of health, and many physicians consider it a vital sign. Apple Watch Series 8 features innovative new temperature-sensing capabilities that give women further insights into their health, designed with the same privacy protections as with all other health data.1

Apple Watch Series 8 takes a unique approach to temperature sensing with a two-sensor design — one sensor on the back of the watch, nearest the skin, and another just under the display — reducing bias from the outside environment.

Nighttime wrist temperature can be a good indicator of overall body temperature. The sensors in Apple Watch Series 8 sample the wrist temperature during sleep every five seconds and measure changes as small as 0.1° C. In the Health app, users can see nightly shifts in baseline temperature, which can be caused by exercise, jet lag, or even illness.2

Utilizing the new temperature-sensing capabilities in Apple Watch Series 8, users can receive retrospective ovulation estimates. Knowing when ovulation has occurred can be helpful for family planning, and Apple Watch Series 8 makes it easy and convenient by providing these estimates in the Health app. Temperature sensing also enables improved period predictions.

Additionally, with iOS 16 and watchOS 9, all Cycle Tracking users can now receive a notification if their logged cycle history shows a possible deviation, such as irregular, infrequent, or prolonged periods, and persistent spotting, which can be symptoms of underlying health conditions. 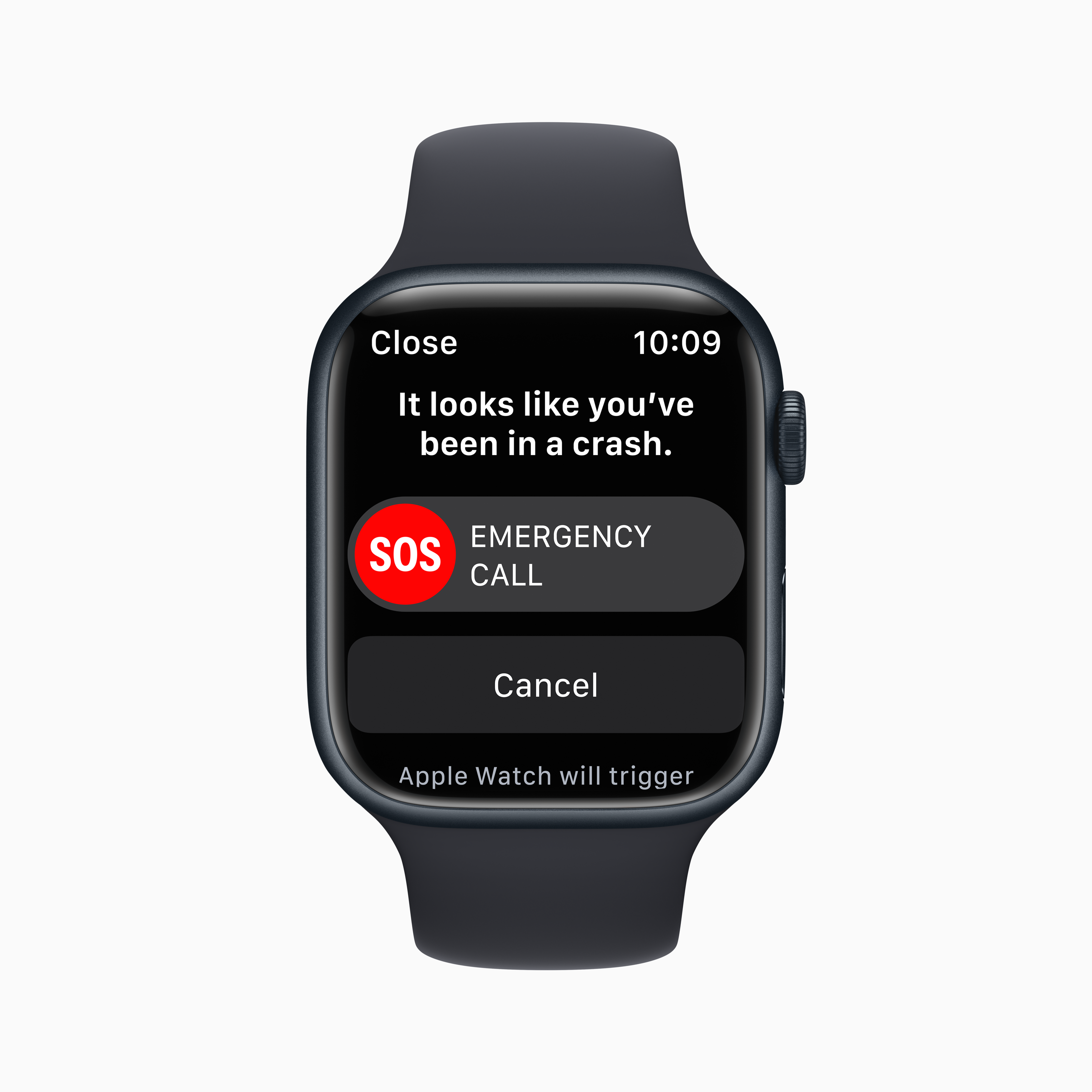 To enable Crash Detection, Apple developed an advanced sensor-fusion algorithm that leverages a new, more powerful gyroscope and accelerometer on Apple Watch, which now has the highest dynamic range accelerometer in any smartwatch. To create the algorithm, data was collected from these new motion sensors at professional crash test labs with common passenger cars in simulated real-world accidents, including head-on, rear-end, side-impact, and rollovers. In addition to motion data, Crash Detection uses the barometer, GPS, and the microphone on iPhone as inputs to detect the unique patterns that can indicate whether a severe crash has taken place.

When Apple Watch detects a severe car crash, the device will check in with the user and dial emergency services if they are unresponsive after a 10-second countdown. Emergency responders will receive the user’s device location, which is also shared with the user’s emergency contacts. When combined, Crash Detection on Apple Watch and iPhone work seamlessly to get users help efficiently. When a severe car crash is detected, the emergency services call interface will appear on Apple Watch, as it is most likely to be in closer proximity to the user, while the call is placed through iPhone if it is in range for the best possible connection.

To keep users connected for even longer, a new Low Power Mode can extend battery life to reach up to 36 hours for Apple Watch Series 8 with iPhone present.3 This new mode temporarily disables or limits select sensors and features, including the Always-On Retina display, workout autostart, heart health notifications, and more.

Apple Watch Nike and Apple Watch Hermès also debut new bands and watch faces this fall. Nike has vibrant new Sport Band colors and a new Sport Loop with the “Just Do It” logo woven right into the band. Starting this fall, any Apple Watch user running watchOS 9 — even those without a Nike model — will be able to access all the Nike watch faces, including the fresh colors coming to the Bounce face.

Apple Watch Hermès introduces two new bands: H Diagonal, which creates a sporty pattern of the Hermès H with hundreds of microperforations, and Gourmette Metal, which features a polished stainless steel chain and noir leather wrapping twice around the wrist. A whimsical new Hermès watch face called Lucky Horse beautifully complements the new bands and celebrates the equestrian roots of the house with an animated horse that sleeps when the wrist is down and comes alive when it is raised. 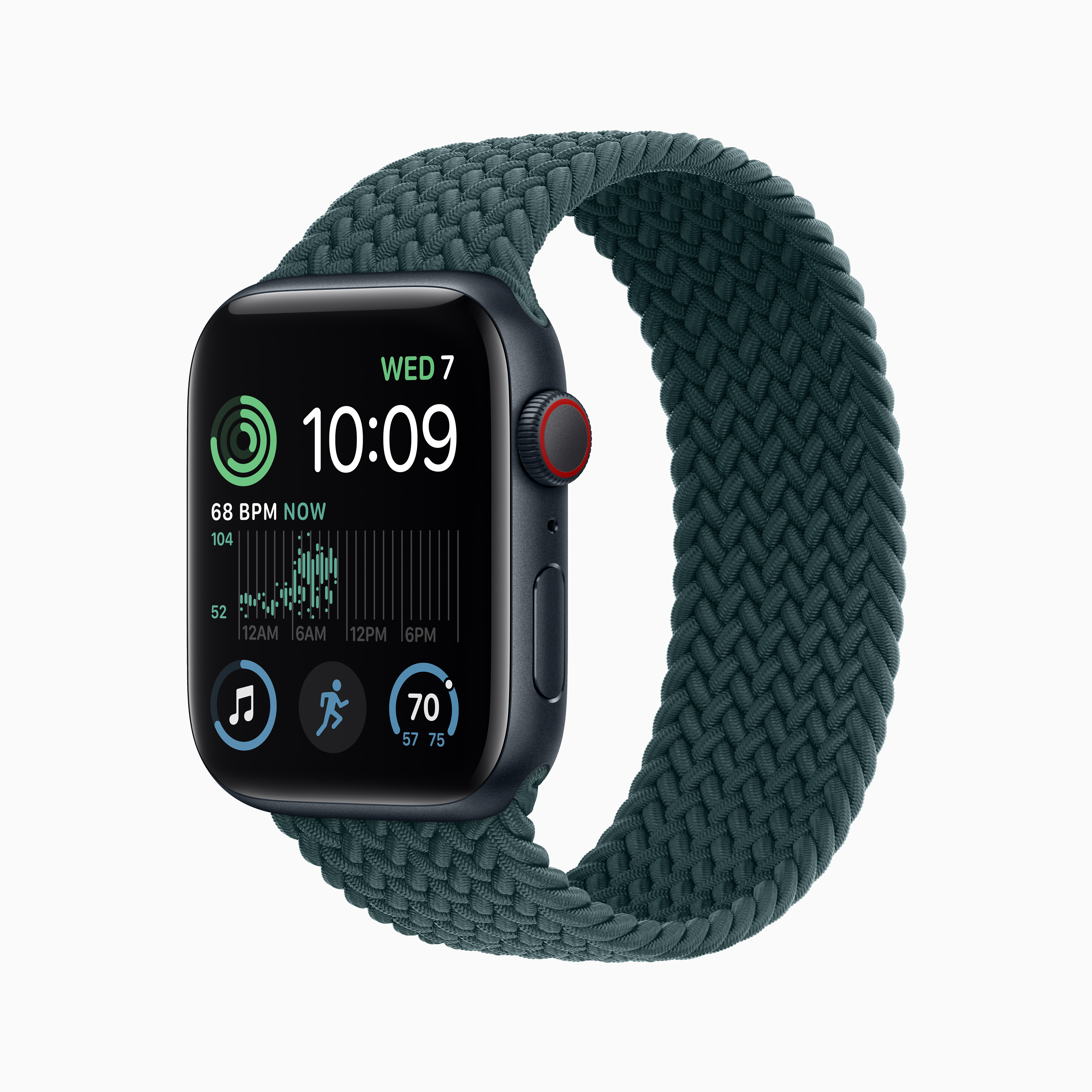 The new Apple Watch SE delivers advanced features at a new low price, and is a great way for users to start their Apple Watch journey, use with Family Setup, or gift to their loved ones. Powerful upgrades include the S8 SiP advanced dual-core processor, the same processor that is in Apple Watch Series 8 and Apple Watch Ultra, making it 20 percent faster than the previous generation, along with Crash Detection and international roaming.

Apple Watch SE maintains the same case design, but features a redesigned matching back case made of a nylon composite material, making it lighter than ever. With watchOS 9, Apple Watch SE users can enjoy the benefits of the new Compass app in addition to the enhanced fitness and wellness features. Apple Watch SE is available in 40mm and 44mm aluminum cases, in midnight, starlight, and silver finishes, and is compatible with all bands.

Apple Watch and the Environment

Today, Apple is carbon neutral for global corporate operations, and by 2030, plans to be 100 percent carbon neutral across the entire manufacturing supply chains and all product life cycles. This means that every Apple device sold, from component manufacturing, assembly, transport, customer use, charging, all the way through recycling and material recovery, will have net-zero climate impact.

Privacy is fundamental in the design and development across all of Apple’s features. When a user’s iPhone is locked with a passcode, Touch ID, or Face ID, all of their health and fitness data in the Health app — other than Medical ID — is encrypted. Any Health data backed up to iCloud is encrypted both in transit and on Apple servers. When using iOS and watchOS with the default two-factor authentication and a passcode, Health app data synced to iCloud is encrypted end-to-end, meaning that Apple does not have the key to decrypt the data and therefore cannot read it.