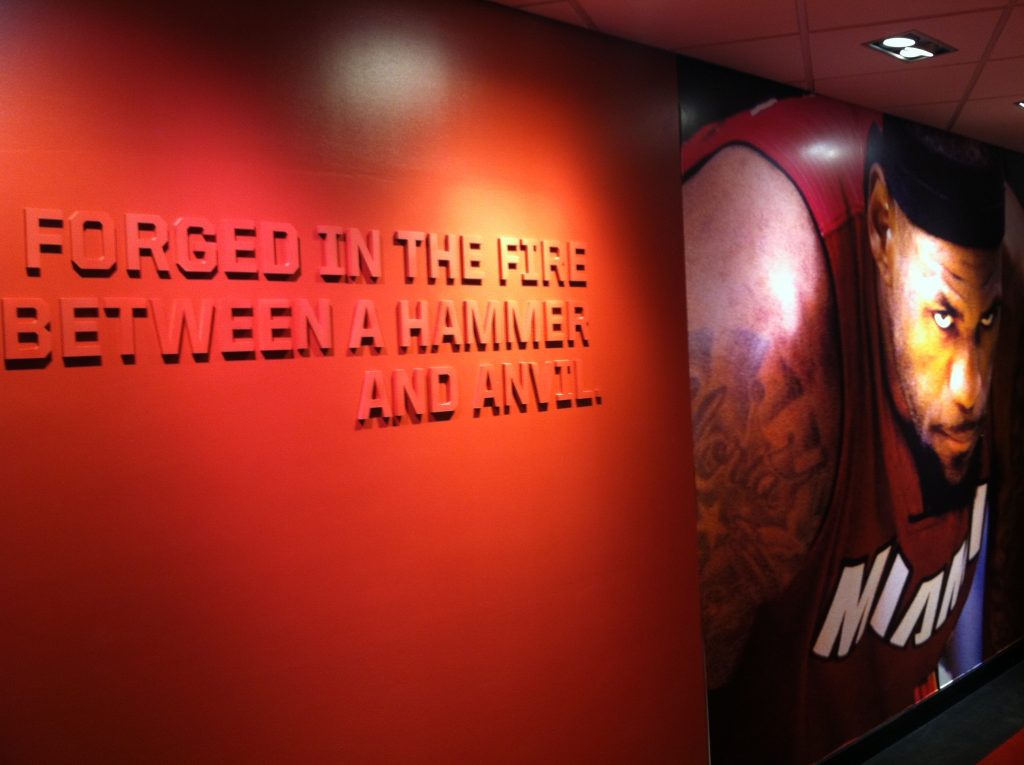 I thought I was prepared for the NBA game where the Miami Heat defeated the Charlotte Bobcats. My pre-game notes included Erik Spoelstra being named the NBA Eastern Conference coach of the month of February, Heat on a seven-game win streak, Dwyane Wade out for the game and the Bobcats making a run at just their second postseason berth in franchise history.

I was not prepared for the player in the clear protective mask.

In Saturday’s win over the Orlando Magic, LeBron James scored 20 points; it ended a 5- game streak scoring at least 31 points. James started a new streak by scoring his career- best and Miami Heat franchise record 61 points previously held by Glen Rice who scored 56 to set the Heat record on April 15, 1995, against Orlando. James also tied his career best with eight three pointers and is the first player ever with 60 plus points and 80 percent shooting from three-point range. “I was able to do it in a win, I probably had three heat check shots out of rhythm and doing it in front of my brothers means so much to me,” James stated. The Bobcats had a nine point lead in the first quarter led by Al Jefferson who finished with 38 points and 19 rebounds, but that was overshadowed by the reigning MVP’s performance.

James suffered a broken nose on February 20th against Oklahoma City; this was his third game in a row wearing a protective mask. The NBA requested a clear protective mask as opposed to the black one he unveiled for Thursday’s blowout of the New York Knicks.

After Monday’s game, James was averaging 37.3 points per game with the mask, 26.9 PPG without it. “I knew he was a special player in his very first preseason game in a Heat uniform, the speed is what set him apart,” Heat head coach Erik Spoelstra stated. King James set a career high with 25 points in a quarter and 22 made field goals overall along with his new scoring performance.

The last three 55-point games in the NBA have now come against the Michael Jordan owned Bobcats. LeBron James, Carmelo Anthony and Deron Williams are the players who keep the streak bouncing along. I was a witness literally to the scoring outburst and I felt I was in the zone with him from the press box. James is known as a facilitator first. Without guard Dwyane Wade who was off the night to rest, teammates gave James the ball. “Every night I go on the floor I want to be the MVP, of this league, MVP of this team, MVP for me, myself and my family,” James said. “I’ve set a high standard and I have to live by that.” The Heat improved to 10-6 when Wade doesn’t play. They’re 33-8 when he does.

Heat fans impressed with the first pick in the 2003 NBA draft chanted M-V-P as they all were part of history. One player who may have not been impressed is Wilt Chamberlain who owns a record 32 60-point games, Kobe Bryant is second with five. Chamberlain is the only player in NBA history to score 60 points consecutively doing it 11 times. Carmelo Anthony had 62 points for the Knicks against the Bobcats on Jan. 24. LeBron and Melo are the first players from same draft class with 60 plus points in a game in the same season. The Heat play a back-to-back as they travel to Houston to face Dwight Howard and the Rockets in game one of a three game road trip.