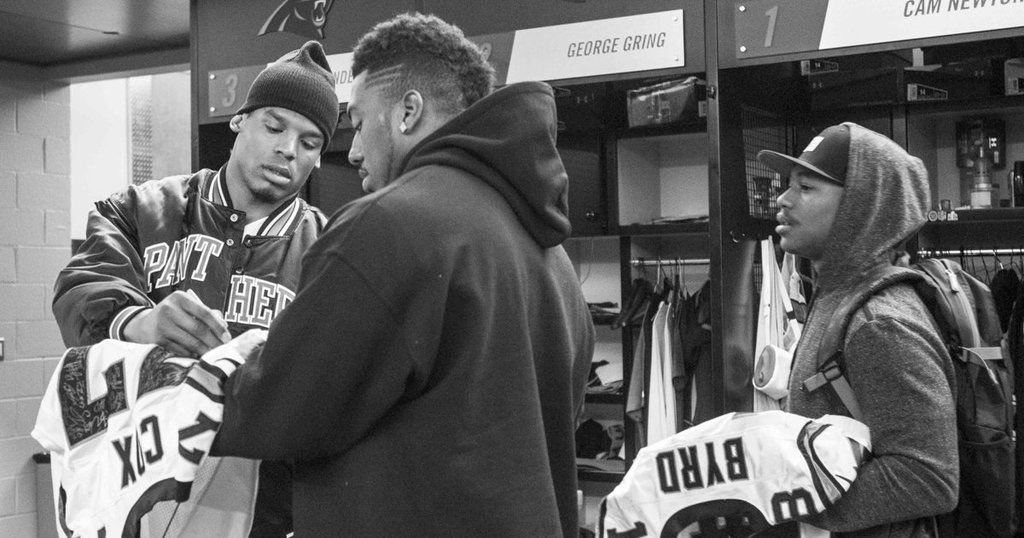 There is an old saying, never criticize a man until you have walked a mile in his shoes. Carolina Panthers quarterback and NFL MVP Cam Newton after losing Super Bowl 50 to the Denver Broncos failed to exhibit his signature smile on his face during his postgame news conference understandably so. The dab-bing, team photos on the sideline and the winning was all-new to me this season. During the news conference, I thought to myself, I’ve seen this before, same old Cam.

At the news conference itself, Newton answered questions very briefly, very superficially which is fair after a lost. As an MVP, you have to be ready for the criticism for the way you handled it emotionally. Again, memories of his behavior when he entered the NFL and suffered a lot of frustrating loses early in his career. Fast-forward 48 hours later.

Garbage bag day, the day when players clean out their lockers. The media was present, but did Newton owe anyone an apology? No. Addressing the criticism regarding the postgame news conference; fair. However, what he said was worse than post-Super Bowl considering he had two days to cool off.

With the Panthers attempting to drive down the field and trailing by six points, Newton fumbled and appeared to have backed away from the football to recover it. “OK I didn’t get the fumble. We can play tit-for-tat. I’ve seen numerous quarterbacks throw interceptions and their effort afterwards and they don’t go. I don’t dive on one fumble because the way my leg was, it could have been contorted in some way,” Newton said. This from a quarterback who emulates the famous unbuttoning of his shirt to illustrate comic character superman showing the S on the chest. Moreover John Elway is known for one of the most famous helicopter dives in the Super Bowl sacrificing his body for a team win.

Newton said stop me and I won’t dab. They stopped him and he had no level of graciousness. Cam says we have not seen an athlete like him before; yes we have; an athlete that pouts. Cam got hit and humbled. “If I offended somebody, that’s cool. I know who I am and I’m not about to conform nor bend for anybody’s expectations, because your or anybody else’s expectations will never exceed mine.” There is expectation on how an MVP behaves. I could not help but feel that he shrunk under the bright lights and was not emotionally ready for the outcome of losing on the big stage.

I believe in life you have to take the road less traveled. The Panthers team gave away footballs to kids this season, I hoped they gave the ball on the lone touchdown run by Jonathan Stewart to a child, but they did not. On garbage day, put on a smile, look in the camera and say kids this is not too good sportsmanship etc. Athletes love the media when they win but not when they lose. Redeem yourself, take the road less traveled. Not the one where dab-bing stymies any grace under pressure.

0 0 0 0
Previous : Super Bowl 50 a script written for Peyton Manning starring Cam Newton
Next : Miami lost to Golden State but things will only heat up