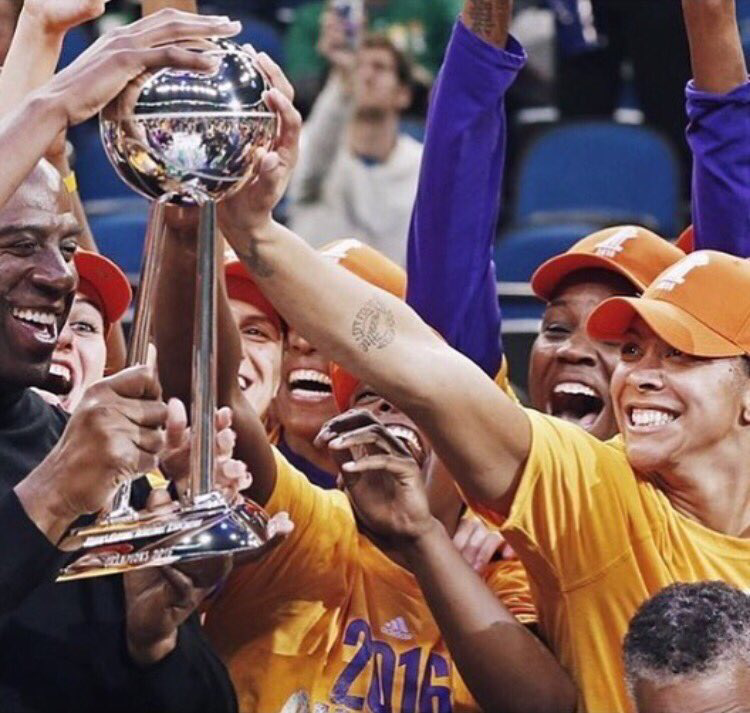 I remember Los Angeles Sparks forward Candace Parker as the first woman I ever saw dunk in the NCAA Tournament.

Nneka Ogwumike’s short jumper with 3.1 seconds left, off the rebound of Parker’s blocked shot, gave the Sparks a 77-76 victory over the defending champion Minnesota Lynx in the deciding Game 5 of the WNBA Finals. It was the Sparks’ first title in 14 years.

Parker has dunked however she has added the most valuable milestone to her trophy room that has eluded her. A WNBA championship.

Parker had 28 points and 12 rebounds to earn MVP honors of the Finals. She survived a storm that included the death earlier this year of her beloved former coach Pat Summitt, with whom she won two NCAA championships at Tennessee. Parker also was left off the U.S. Olympic team after helping them win a gold medal in the previous two games. However this is the most driven and team-oriented player I have ever seen her become.

This is evident with her teammate Ogwumike winning the regular-season MVP. “The journey to get here, I wouldn’t have wanted to do it with anybody else,” Parker said. “It’s amazing, when you surround yourself with good people, how fun it is.” Her surrounding support even came from an NBA great in the front office.

Magic Johnson, a part owner of the Sparks, was in the building. His presence was all the more impressive considering the Los Angeles Dodgers, the other pro club he’s invested in, also played in Game 5 of their baseball National League Championship Series that night.

Parker, who turned 30 in April, missed the finals her rookie year in 2008 when the Sparks lost in the Western Conference Finals. Unselfishly she stated, “This one is for Pat.” Parker at one point was listed on Tennessee’s roster as forward, center and guard but attributes the foundation of the Game 5 win to Summitt’s coaching. “This series really was about defense and finishing plays [by] rebounding, and I heard that for four years at Tennessee,” Parker said. “I think in years past, maybe I was doing a lot and maybe I could have used a little help. But this year, it was on me. My teammates were doing their part, I had to step up and do mine.”

In the 2016 playoffs, Parker averaged 19.3 points, 8.7 rebounds, 3.2 assists and nearly two blocks. None of these numbers are career highs however her presence of being in her first finals was felt from even the first playoff game. “I’ve played with Candace for five years, and this was the most growth that I’ve ever seen from her,” Alana Beard said. “She consistently worked on it. And openly worked on it — she was vulnerable in situations, and that’s when you grow. She proved she can be a team player, and she did it this entire season.”

We know she can dunk. However Parker missed the first eight games of the 2009 WNBA season after giving birth to daughter, Lailaa Williams. In late June, Parker returned to practice with her teammates for the first time. She played her first game back from maternity leave in early July. Parker was named to the All-WNBA second team and All-Defensive second team despite missing almost a full month, due to her maternity leave. She led the Sparks to the Western Conference Finals but lost in Game 3 to the Phoenix Mercury. In the playoffs, Parker averaged 18 points and 10.7 rebounds per game, a double-double.

Lailaa joined Parker and her teammates in accepting the WNBA Finals trophy. Parker has been a champion mother with the natural joy in raising her daughter plus sharing her with the world. Parker traveled and raised her overseas in the summers to play the game she loves. Call her a two-time champion.