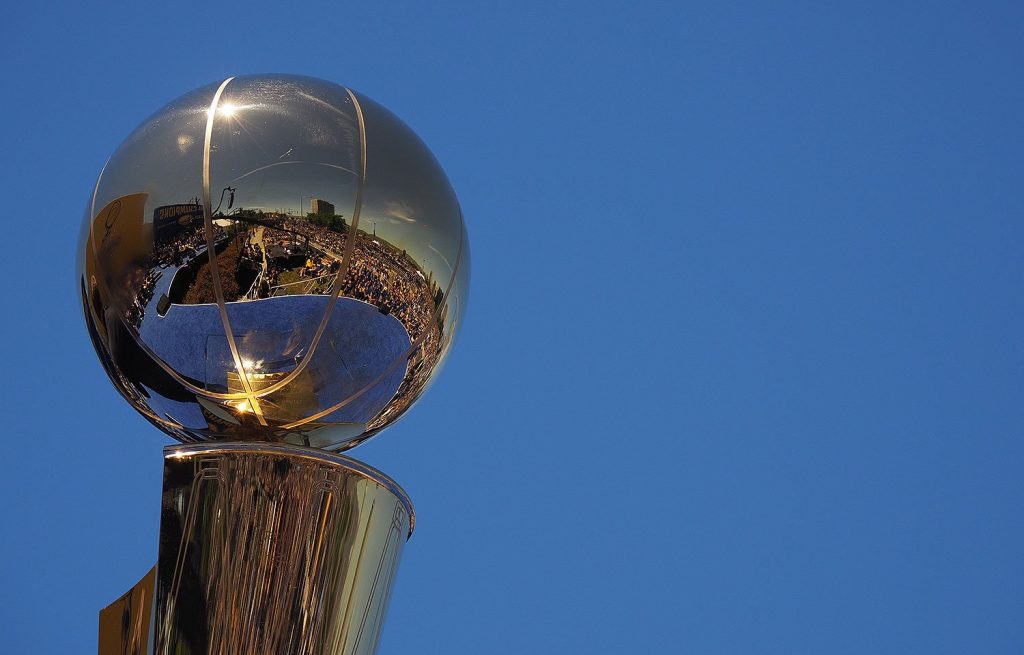 The Golden State Warriors led by Kevin Durant’s 39 points in a near sweep, Finals-clinching 129-120 victory over LeBron James and the Cleveland Cavaliers in Game 5 are your 2017 NBA Finals champions. Just like I predicted. Smirk.

There is so much to process here. It all begins with LeBron’s block to seal a win when the Cavaliers were down three games to one in last season’s Finals. That led Golden State’s Draymond Green on a mission to never let that happen again and to send a text to the current NBA Finals MVP Kevin Durant. The Warriors eliminated Durant and the Thunder in last season’s Western Conference Finals after Oklahoma City went up three games to one. There are storylines between all of this, however this present moment is what we have now.

Now the Warriors are the champs. After the business decision and Green’s persuasion, Durant got his first ring.

“You can talk about whatever you want to talk about, but nobody comes in and cares about the game or loves the game as much as I do or works as hard as I do at the basketball game. You can talk about whatever happens on the outside, but inside those lines, I come to bring it every day,” Durant said. “I work hard, I believe in myself, I believe in the game, I respect the game, I love the game, and I knew at some point in my life that it will come around for me.”

The Warriors are not a super team. They are a super-duper team. Stephen Curry added 34 points, 10 assists and six rebounds as Golden State closed out its second title in three years after squandering that 3-1 lead a year ago. Andre Iguodala, the 2015 Finals MVP, came up big again with his 2017 postseason-best 20 points off the bench.

“I am talking too much at this point. I had a couple too many beers. I have not had a beer since February,” Durant stated. “So to have a beer right now and talk to you guys feels great.”

LeBron James learned you need a super-duper team to dethrone him. It is a compliment to his greatness, right? James is now 3-5 in the NBA Finals (two with the Miami Heat) in his seventh straight appearance. James filled up the box score with 41 points, 13 rebounds and eight assists.

“I left everything on the floor every game,” James said after averaging a triple-double in his eighth Finals.

Cleveland’s defense was the death of them. Cavs do not play good defense. They did not play good defense the entire series. You cannot score 120 and give up 129 points in a game and expect to win. Since Game 1, the Cavaliers took it for granted opening lanes to the basket for Golden State to drive down and they were only able to win one game in the series. This series could have been tied 2-2 at one point.

Five Finals losses doesn’t hurt LeBron’s legacy. He will not get off easy but his numbers are historical. LeBron is not to blame for them losing. He may not be the greatest however he will go down as historically great. Don’t take him for granted. LeBron’s Cavaliers took the regular season off as they won only 53 games. It showed. Their opponent was a well-oiled machine.

As I mentioned, LeBron is now 3-5 in the Finals. Statistically he will be better than Jordan, but Jordan was 6-0 in the Finals with six MVPs. You can’t argue with that.

This Warriors team is one of the greatest teams of all-time. This team was one game away from sweeping LeBron James, Kyrie Irving and Kevin Love, future Hall of Famers. And swept everyone on the way to the Finals.

LeBron does not have the team to compete with the Warriors. The Cavaliers will need to make moves.

The Warriors missed becoming the first undefeated champion in the playoffs, but 16-1 still gave Golden State the best winning percentage of any title team at .941.

I don’t know who is going to dethrone this Warriors team in years to come. The NBA will not be enjoyable to watch in the future with this team’s dominance. It is going to be boring and not good for the league. This team is head and shoulders above everyone else. This team’s age is in their 20s and with pay days to come. They are going to win nearly 70 games each season. Only the Warriors can stop the Warriors. How are you going to beat this team four times in a seven-game series and two of those wins need to come at Oracle Arena? Oh… and these players are hungry for more titles.