MIAMI – Today, the Miami HEAT unveiled its Miami Mashup City Edition uniform, accompanying merchandise line and marketing campaign. Miami Mashup celebrates the most iconic on-court looks seen throughout the team’s 34-year history, while the uniform itself makes some history of its own: it’s the first uniform in professional sports to feature unique, individualized number styles across each player’s jersey. The launch of the Miami Mashup campaign is presented by American Airlines.

In the Heat of the moment, Miami adds Kyle Lowry and sign Jimmy Butler to extension

The Miami Mashup uniform is anything but uniform. For the first time ever, HEAT players were given the opportunity to choose their own unique number style(s) to represent their official uniform number. A collection of 72 different numbers across 8 styles – each pulled from eight of the most celebrated HEAT uniforms – ensures that no two players’ jerseys are alike, resulting in a true game-changer in professional team sports outfitting.

The Miami Mashup uniform takes fan customization to a whole new level by giving HEAT fans the ability to mix and match the number styles of their favorite player’s jersey. And just like the players, fans can choose from 72 different numbers across 8 styles to design a Miami Mashup jersey all their own—an offering that yields 5,256 possible number style combinations. Official Miami Mashup “Player’s Choice” jerseys – which feature a given player’s name, official number and their selected number styles – are available as well. 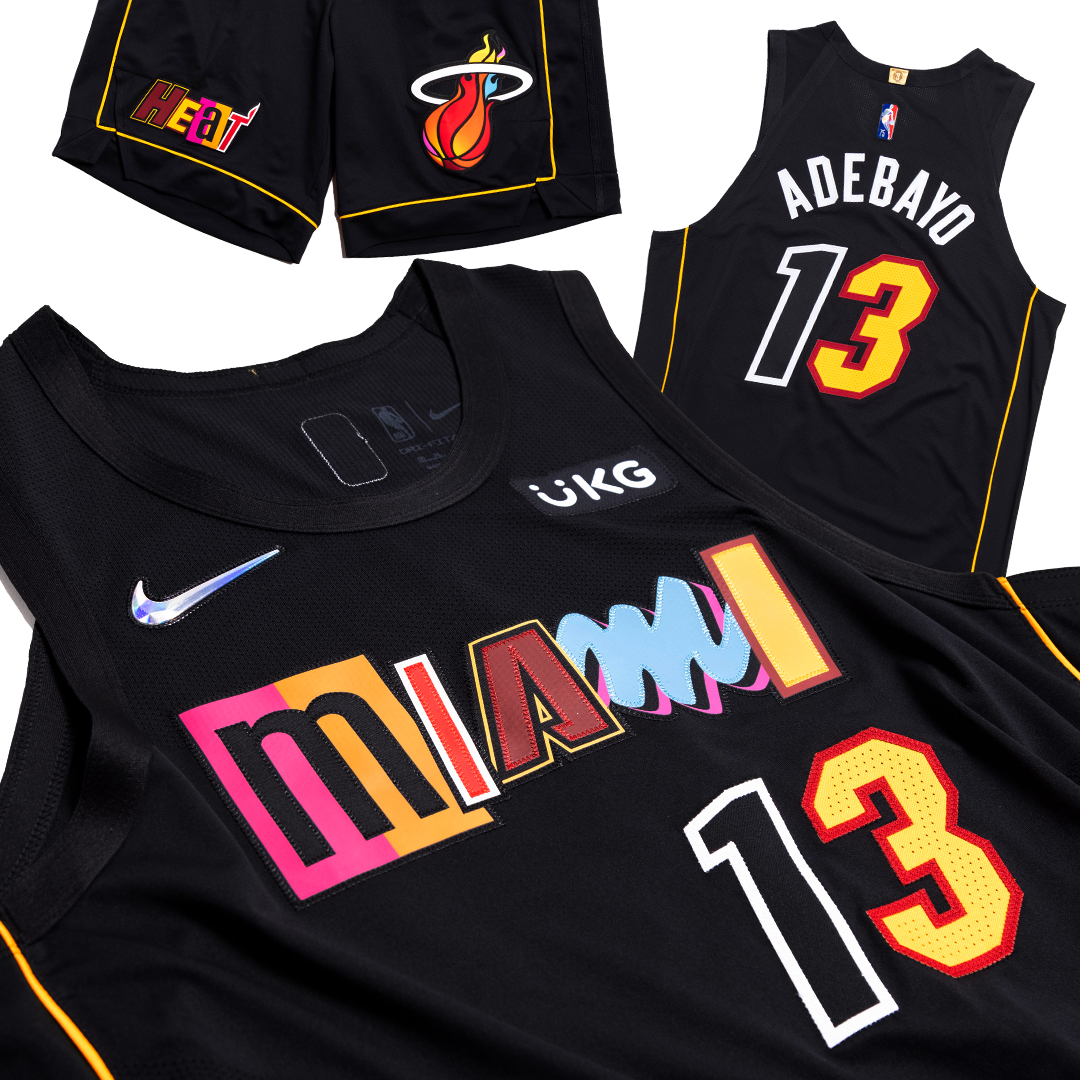 An interactive experience on www.miamiheatstore.com will allow fans to mash up the number styles to build their own “1-of-1” Miami Mashup player jersey. In addition, the HEAT have created the HEAT Jersey Lab: an immersive new store location inside FTX Arena (Section 112) that offers fans an in-person opportunity to create their “you-nique” interpretation of the Miami Mashup jersey during HEAT games. Jersey customization will also be offered at all Miami HEAT Store locations: FTX Arena, Dolphin Mall, Pembroke Lakes Mall, and Miami International Airport.

Designed in-house by the Miami HEAT Creative team, the Miami Mashup uniform’s black base color provides the foundation for its Mashup-style “MIAMI” wordmark across the chest, which features assorted letter styles pulled from the team’s Miami Floridians, Classic Home and Road, VICE Nights, and Championship Ring Ceremony uniform sets. Below the wordmark appears the jersey’s front number, in a number style chosen by each HEAT player. That same design aesthetic extends to the uniform’s shorts, which feature a Mashup-style “HEAT” wordmark on the lower right leg, as well as a multicolored version of the team’s classic “ball and flame” logo on the lower left leg.

The Miami Mashup uniform also weaves in several homages to the HEAT’s Championship-winning history. The uniform features a thin “trophy gold” stripe that frames the ensemble of elements—a nod to the infamous yellow ropes brought out seconds before “The Shot” during the 2013 NBA Finals. Running down the uniform’s side panels is a subtle satin band that references the organization’s “black tie” opening night event in November of 1988, and on the waistband of the shorts, the years “2006,” “2012” and “2013” are stacked vertically as a tribute to the three years in which the HEAT have won a Championship.

Rounding out the uniform’s Championship-inspired theme is the “15 STRONG” wordmark – a rallying cry used throughout the team’s 2006 Championship run – located on the jersey’s “anthem” spot just above the jock tag.

The HEAT will wear the Miami Mashup uniform for the following 22 games: