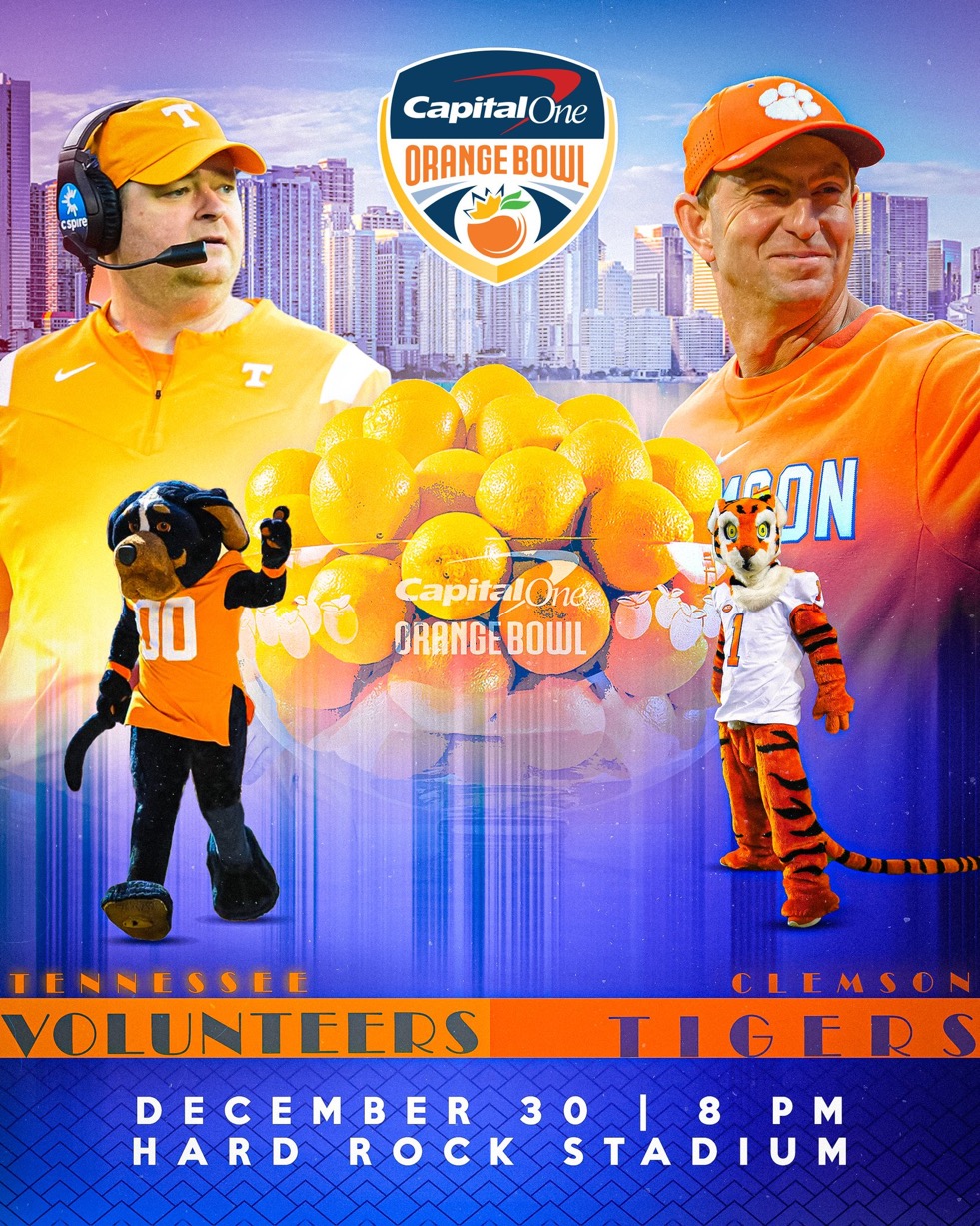 The Orange Bowl this year will be highly Orange.

The Tennessee Volunteers will meet Clemson. Only the fourth time Clemson and Tennessee have met in football over the past 75 years.

This is the 22nd consecutive season in which the ACC earned at least six bowl bids. Not including the pandemic-affected 2020 season, the ACC has sent at least nine teams to a bowl every year since 2016. Since 2013, the ACC has been second among all conferences with 100 postseason appearances.

“Congratulations to each of the ACC’s nine bowl-eligible teams – including this year’s ACC Champions, the Clemson Tigers – and we look forward to watching them compete during this year’s College Football Playoff New Year’s Six and Bowl Season,” said ACC Commissioner Jim Phillips, Ph.D. “Following an incredibly competitive football season, we look forward to celebrating the many accomplishments of our student-athletes in the postseason.”

Clemson will be making a bowl appearance for the 18th consecutive year, adding to its current school record that began in 2005. It is the longest active streak among ACC teams and the fifth-longest in the nation. In total, it will be Clemson’s 49th bowl appearance, with the Tigers holding a 26-22 record in bowl play.

No. 21 Notre Dame, part of the ACC bowl selection process if not selected for the CFP, received a berth in TaxSlayer Gator Bowl.

Two key players stand out on both sides of these orange teams in the Orange Bowl.

Key player for Volunteers : Nobody in Tennessee’s program wanted Joe Milton III to get his shot this way. But with star quarterback Hendon Hooker going down with a season-ending ACL tear, Milton gets a chance to show what he’s got on a big stage. It’s also an opportunity to see how much Milton has improved from a year ago, when he opened the 2021 season as the Vols’ starter but was replaced by Hooker. Milton’s arm strength is incredible, and at 245 pounds, he’s a bruising runner in short-yardage situations. The challenge for Milton is accuracy. He’s been prone to overthrow receivers and rifle passes that were hard to catch when he could have used more finesse. The feeling around Tennessee’s program is that Milton has polished up his game in all phases. The Vols will need that version of Milton against a talented Clemson defense.

Key player for Tigers: Quarterback Cade Klubnik. While most Clemson fans are likely to spend the time between now and the Orange Bowl thinking of what might have been had Klubnik been the Tigers’ starter all season, there’s still the very real question of whether his star turn in the ACC championship game marked the start of a new era or just a good game against a bad defense. Yes, Klubnik was an elite recruit with tons of talent, but until the North Carolina game, he hadn’t impressed on the field in limited reps on game days and hadn’t won over the coaching staff enough to unseat DJ Uiagalelei as the Tigers’ starter, even when the offense struggled. Remember that the Tar Heels had one of the worst pass defenses in the ACC in 2022, and they were down two key defensive backs in the matchup against Clemson. It seems clear Klubnik was a real improvement over Uiagalelei.

The schedule is as follows, in chronological order:

North Carolina will be making its 37th bowl appearance when it takes on Oregon. This will be the 26th bowl game for head coach Mack Brown, who owns a 15-10 record in postseason games. The Tar Heels will appear in a bowl game for the fourth year in a row but in the Holiday Bowl for the first time. Oregon is currently ranked 15th in the College Football Playoff poll, 14th in the Coaches Poll and 15th in the AP Poll. This will be the first game between the Tar Heels and the Ducks.

Florida State is making its 49th overall bowl trip. The Seminoles are 3-0 in the Cheez-It Bowl, tied for the most wins in bowl history. The Cheez-It Bowl will be the fifth postseason matchup between Florida State and Oklahoma, with FSU winning the Gator Bowl on Jan. 2, 1965, and Oklahoma earning wins in the Orange Bowl following the 1979, 1980 and 2000 seasons. FSU is 6-4 in bowl games against current Big 12 teams.

The overall series record between NC State and Maryland stands exactly even at 33-33-4. The Wolfpack and the Terps met every year on the gridiron from 1956 until Maryland’s departure from the ACC following the 2013 season. This is NC State’s 34th bowl appearance (17-15-1) and will mark the fourth time the Wolfpack has played a bowl game in Bank of America Stadium. The Wolfpack won the 2005 Meineke Car Care Bowl and the 2011 Belk Bowl and lost the 2015 Belk Bowl.

The Wasabi Fenway Bowl will be the 19th different bowl game for Louisville, and Cincinnati will be the Cardinals’ 22nd bowl opponent. The Fenway Bowl will be the 11th game that the Cardinals have played in a Major League Baseball stadium. The teams will play for the Keg of Nails, a traveling trophy awarded to the winner of the Louisville-Cincinnati game since 1929. The exchange between the universities of two cities connected by Interstate 71, is believed to have been initiated by the universities’ fraternity chapters, signifying that the winning players in the game were “tough as nails.”

Wake Forest’s appearance in the Gasparilla Bowl will mark the first time the Demon Deacons will play a postseason game in Tampa, but the program has a lot of experience with bowl games in the Sunshine State. Overall, this will mark Wake Forest’s fifth bowl experience in Florida and its second-straight as the Deacs defeated Rutgers in the TaxSlayer Gator Bowl a season ago. The Deacons will face Missouri for the first time as it makes its school-record seventh consecutive bowl appearance under head coach Dave Clawson and its 17th overall postseason trip.

Duke, under ACC Coach of the Year Mike Elko, enters the Military Bowl versus UCF with an all-time record of 6-8 in bowl games and wins in each of its last three postseason contests. Elko has participated in eight previous bowl games as a defensive coordinator, helping Bowling Green (0-3), Wake Forest (1-0), Notre Dame (1-0) and Texas A&M (3-0) to a combined 5-3 record. The Blue Devils will face UCF for the first time.

The Pinstripe Bowl trip will mark Syracuse’s 27th bowl game. The program’s .635 postseason winning percentage (16-9-1) is the sixth-best in the FBS among teams with 15-or-more bowl games played. This year’s Pinstripe Bowl will be a rematch of the 2013 Texas Bowl, where the Orange came away with a 21-17 win. The Orange are 2-3 versus Minnesota all time.

ACC Communications contributed to the previews