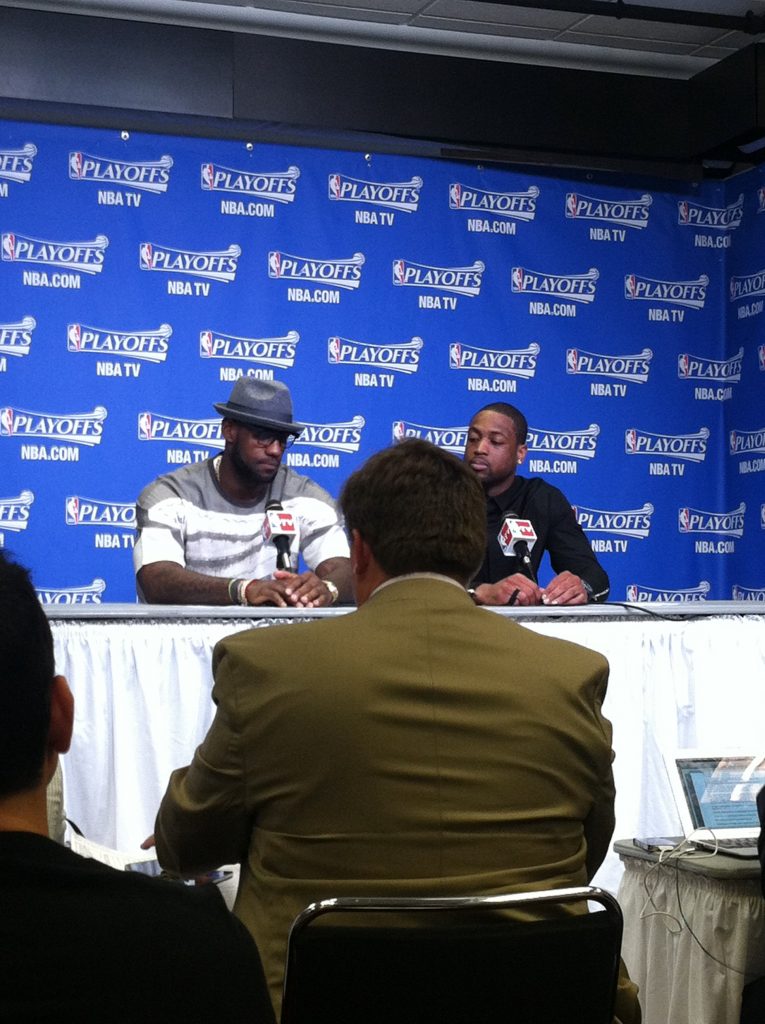 I move forward the only direction, but don’t be mad at him when he’s on to the next one. Ray Allen hit a 3-pointer with 32 seconds remaining to give the Miami Heat their first lead since the first half. From there the Heat locked down defensively eliminating the Brooklyn Nets 96-94 to move on to their fourth straight Eastern Conference Finals.

The Heat were ice cold from the land of three in the first half; they shot a season-worst 1-of-16 from 3-point range. The Heat hit eight second-half 3-pointers with Allen in typical fashion coming to the rescue when they needed an important one. “I was like this ball is going up. It is something I practice every day, getting your feet ready and right and putting it up in the air,” Allen stated. He finished with 13 points off the bench.

The two time defending champs have been here before. It was the 10th straight series win for the Heat. LeBron James started the game slow with nine first half points. James turned up the Heat in the second half, adding 20, scoring 29 points overall, 15 of which came from the charity stripe. Defensively his presence was also felt. He was assigned to guard Joe Johnson whom he prevented on the game’s final possession, from tying the game.

Johnson carried the Nets and a lead into the fourth quarter. The Heat outscored them 30-19 in the fourth. With less than five minutes left, Brooklyn missed nine straight shots while Miami went on a 12-0 run. “This team was assembled to go deep in the playoffs, win a championship. We’ve overcome so much adversity throughout the season,” Johnson stated. He finished with a game-high 34 points, 7 rebounds and 3 assists.

Including luxury tax, it cost Nets owner Mikhail Prokhorov a league-high $193M to put his team on the court this season. No picks in the 2014 NBA Draft and $85.1M in guaranteed contracts in 2014-15. Paul Pierce who finished with 19 points is an unrestricted free agent. Kevin Garnett only had two points; he is entering the final season of his current contract (the $12M he’s due to make is fully guaranteed – was only $6M guaranteed at the time he signed the contract with the Celtics but the Nets agreed to make it fully guaranteed when Garnett agreed to waive his no-trade clause).

The Heat will next face either fifth-seeded Washington or top-seeded Indiana. The Pacers lead that series 3-2, one win away from setting up a rematch with Miami that seemed like an absolute certainty for much of the season.