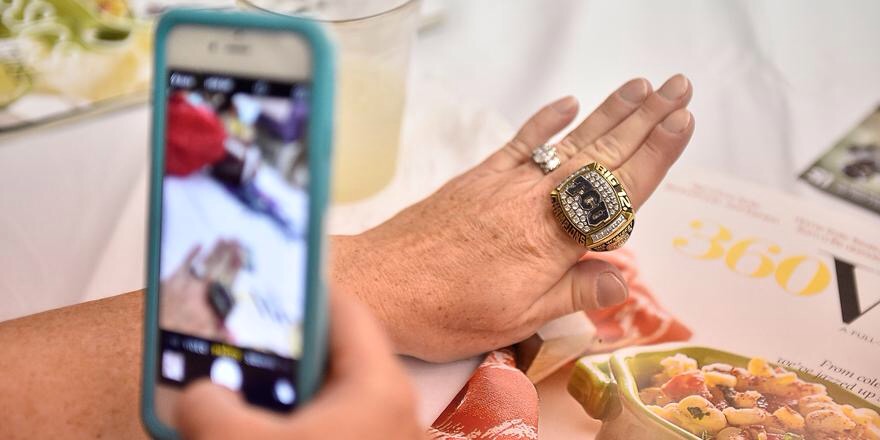 Cue up Andy Williams’ It’s the Most Wonderful Time of the Year. Football season! College football and the NFL. College football is the real preseason. Last season, with the first ever four-team playoff, I really enjoyed college football over the professionals (Miami Dolphins fan). It is way too early, but why not give the gift of giving with my 2015 college football playoff preview. I am of good cheer so let’s start with the stocking stuffers of the New Year’s Six and unwrap my Final Four.

Year after year I can’t help but notice the athletic and speedy playmakers at Clemson. Florida State would outshine them in years past. Clemson quarterback DeShaun Watson has the Tigers prepared to take the ACC back especially with Mike Williams as a primary wide receiver target after leading the team in receiving yards last season.

Notre Dame last season started 6-0 then lost the luck during a four-game losing streak to end the regular season. But the Irish put up a strong fight to win the Music City Bowl with impressive running over LSU. This is the deepest, most well-equipped team Brian Kelly has fielded. If the Irish can improve on the running and iron out the wrinkles at the quarterback position, then Kelly’s sixth season will be better than this Peach Bowl prediction.

The Oregon Ducks are the best team in the Pac-12 North. Last year they lost to Ohio State in the College Football Playoff National Championship game with a guy who won a trophy called the Heisman. Mark Helfrich will have to really take charge after the graduation of a group of seniors who led the program to four postseason victories, two that included the Rose Bowl. The Ducks will return there with a skilled running back Royce Freeman and either quarterback will do in transfer Vernon Adams or Jeff Lockie. It is not the national title though.

I can’t remember the last time the Spartans were an average or bad team. They have always been
overshadowed by the Buckeyes, but are not little brother to Michigan no more. Michigan State is balanced on offense and defense. Quarterback Connor Cook and his offensive line makes the offense pick its poison by air and ground. The defense is led by former Big Ten Defensive Lineman of the Year Shilique Calhoun along with six returning starters. The skill players are the ones who separate them from the Buckeyes and a playoff bid.

The Seminoles lost 11 starters and the best quarterback the past two seasons. They won 29 straight games before falling to Oregon in the Rose Bowl, but the expectations are still the same. FSU went 7-0 in one-possession games with Jameis Winston at QB. Sean Maguire and a young offense with only three returning starters will keep the Seminoles out of the title game, but a fourth straight ACC title would be an accomplishment.

The Broncos 12-2 record and Fiesta Bowl championship were a surprise in 2014. This team is better. The last time Boise State lost more than two conference games in a season was 1998. The Mountain West is theirs for the taking, but a playoff ticket may feel like a lottery ticket they can actually win.

TCU is a very good team. Heisman candidate Trevone Boykin spreads the field and shreds defenses with his feet. The Horned Frogs made a huge turnaround from the year before when they went 4-8 in 2013. This year with Boykin and 10 returning starters, the offense will make plays. In 2014, they allowed just 2.8 yards per run. If they can duplicate this, especially in the final two final games on the schedule, including a road game at Oklahoma and closing at home versus Baylor that will help them pass the eye test to get in the playoff.

Georgia’s defense has improved and all eyes will be on Heisman hopeful Nick Chubb. But they play in the SEC, and have not won the conference since 2005. Thirteen returning starters will have them barking atop the SEC East, but what they do from there will determine whether they are good again or actually great.

The target will be on the Ohio State Buckeyes’ back. The winner of the inaugural College Football Playoff controls its own destiny. Urban Meyer teams move the ball and score and that has only improved every season in Columbus. Defensively seven starters return in coverage and up front. Joey Bosa, the reigning Big Ten Defensive Player of the Year, again will be a headache for offensive linemen and quarterbacks.

USC could be one of the more explosive offenses in the country. Quarterback Cody Kessler returns from one of the best under-the-radar seasons in recent memory. Coming off a 9-4 season, Steve Sarkisian’s first year was not impressive in the eyes of USC boosters especially with a playoff now in the picture. He will face the pressure of huge expectations this fall. The offense will score points, but defensively they have questions to answer especially since DE Leonard Williams departed for the NFL Draft.

The single season passing record holder Blake Sims is gone. Top three receivers Amari Cooper, DeAndrew White and Christion Jones are gone. The school’s number four all-time leading rusher T.J. Yeldon is gone. Oh, to add salt to the wound, three of the five starting linemen depart as well. The good news? Alabama has been stockpiling number one recruiting classes, so there are players ready to fill these roles. With two returning starters on offense, these top recruits will jump in the deep end of the pool with a season opener against Wisconsin in Arlington, Texas.

Baylor’s high scoring offense has led them to three top-15 finishes in the last four seasons. The Bears managed four such finishes between 1961 and 2010. The offense has eight returning starters, but Junior Seth Russell takes the reins from Bryce Petty, whose stats were off the charts while leading the Bears to back-to-back Big 12 championships. Have no fear the defense will gladly take the attention this season. Led by Shawn Oakman and arguably the best defensive line in the country, expectations have never been higher in Waco. Only a late season matchup at TCU can cause another playoff rejection.

The Ohio State Buckeyes and Baylor Bears are arguably the best teams in their respective conferences. The Bears come into the season winners of 26 of their past 30 games. Baylor runs the best quick-strike offense in college football, scoring in three plays or fewer 43 times over the past two seasons. Head Coach Art Briles has worked on improving in believing they can expand on last season’s 87.5 plays per game, which was tops in the FBS. Junior running back Shock Linwood rushed for 1,252 yards and 16 touchdowns last season. The Bears are also loaded at the receiver position with junior Corey Coleman and sophomore KD Cannon. The lethal duo combined for 122 catches for 2,149 yards and 19 TDs last season and does not make coach Briles sound outlandish. But if you finish second you are last.

Everyone finishes second to Ohio State. In his three seasons in Columbus, Urban Meyer has yet to lose to a Big Ten opponent in the regular season. There is a semi quarterback controversy between Cardale Jones and J.T. Barrett after Braxton Miller decided to move to the wide receiver position. Heisman hopeful Ezekiel Elliott rushed for 1,182 yards and 10 TDs in the Buckeyes first 12 games. He was a man among boys then turned the beast mode switch on rushing for 700 yards and 8 TDs in the final three wins over Wisconsin, Alabama and Oregon, just mind-blowing. With an experienced offensive line, Elliott is arguably the best running back in the country. The Buckeyes are not impossible to beat if you tackle them. Ohio State has to maintain the swagger all season long. Urban Meyer’s game-by-game approach is a perfect recipe for them to repeat as national champions.

0 0 0 0
Previous : Ronda Rousey only improves her recipe for being the best of all time
Next : WWW preseason Heisman Contenders