What is the dog quote again?

I will paraphrase. Nonetheless, you can look it up. The fact of the matter is, Nick Foles, the quarterback who returned to the Philadelphia Eagles as a backup quarterback has been an underdog.

It has been that way throughout his career. The inconsistency led him to the underdog role, which was not easy for Foles to accept. As a second-year player in Philadelphia in 2013, he was “ballin” with a 119.2 passer rating and went 8-2 as a starter. While the Eagles began next year 6-2, Foles rating dropped to 81.4 before a broken collarbone landed him on IR. In 2015, Philly traded him to the Rams, and he went 4-7, with a 69.0 rating. Then on, the backup title was slapped on. You can now replace that title with Super Bowl LII Most Valuable Player.

“A couple of years ago there was a time where I was thinking about hanging up the cleats. As people we deal with struggles, that was a moment in my life I thought about it, prayed about it and I am grateful I made the decision to come back here and play,” Foles stated. “I would not be out here without God. Without Jesus in my life, I don’t have the strength to come out here to play this game like that. That’s an everyday walk. We have struggles as people, that has been my rock and my family.”

Foles has been something of a journeyman in his six pro seasons, but he has been spectacular in four career playoff games.

“Being drafted to Philadelphia. Being fortunate enough to come back and be a part of this team,” Foles stated. “To be a piece of this puzzle. It has been a long time coming.”

Foles, who also had a one-yard touchdown reception from tight end Trey Burton, Foles is the first player in NFL history with a touchdown pass and a touchdown catch in a Super Bowl. He is the only quarterback in NFL history to have a 100+ passer rating in each of his first four career postseason starts (minimum 20 attempts per game).

That play call in the huddle leading to his TD reception was “Philly special.”

“We all knew Nick could get it done, ” center Jason Kelce stated. “He has some cleats in the hall of fame for a reason.”

Super Bowl MVP Foles orchestrated the victory with the kind of drive NFL MVP Brady, a five-time champion is known for. The drive covered 14 plays, including a fourth-down conversion. Foles threw the game-winning 11-yard touchdown pass to tight end Zach Ertz with 2:21 remaining in the fourth quarter.

“I felt calm. I mean, we have such a great group of guys, such a great coaching staff,” Foles said. “We felt confident coming in, and we just went out there and played football.” 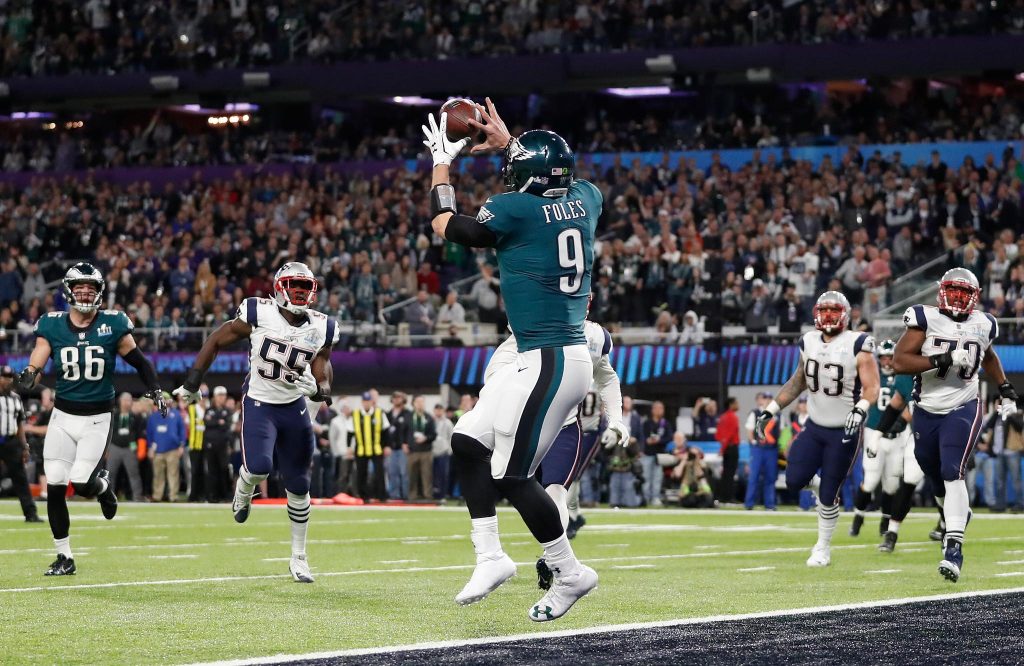 Back to the “Philly special.” Foles suggested the play to head coach Doug Pederson. On fourth down, Cory Clement took a direct snap, pitched to tight end Burton, and the former Florida QB hit an uncovered Foles. The Eagles were up 22-12 at halftime, the most points New England has allowed in the opening half of a Super Bowl under head coach Bill Belichick.

“It’s a big game; it doesn’t get any bigger than this. I felt good; I felt calm. The big thing that helps me was knowing that I did not have to be Superman,” Foles stated. “I have amazing teammates. Amazing coaches around me. All I had to do was play as hard as I could. Play for one another. Play for these guys, not look at the scoreboard and go out and play.”

The underdog who took down Goliath on the opposite sideline will only be legendary wherever God leads him forward. Foles helped Philadelphia join New York, Chicago, Los Angles and Boston as the fifth city to win a Super Bowl, World Series, Stanley Cup and NBA title. How is the sound of that bark?