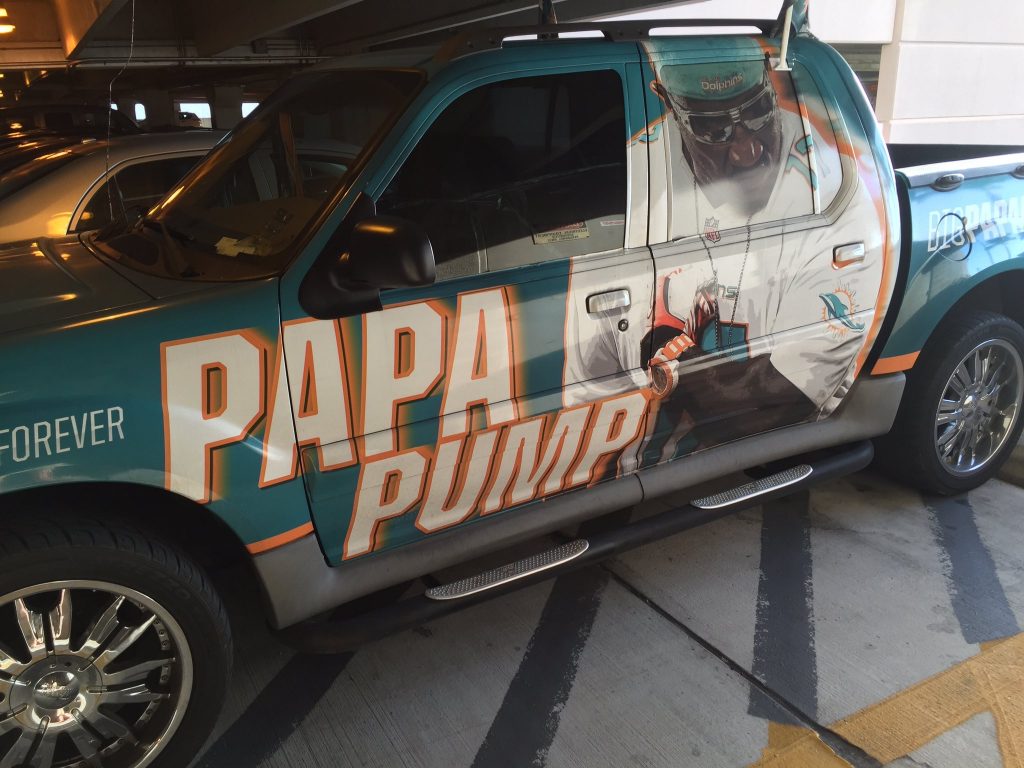 I was born a Miami Dolphins fan. I will live in heaven as a Miami Dolphins fan. The history of this franchise as of recent memory, well the post-Dan Marino era can make your pet cry. Counseling from PETA aside, “Only Wanna Be with You” the 1995 single by American rock group Hootie & the Blowfish, was a hit growing up in the 90s. I sang along with my sister at times. In the bridge of the song is a reference “that the Dolphins make me cry,” alluding to lead singer Darius Rucker’s favorite football team and their championship drought. The Dolphins and the Atlanta Falcons (who also began play in 1966) are the oldest NFL franchises in the Deep South. The Fins won Super Bowls in 1972 after going undefeated and again in 1973. I was not alive to see them win, thank God for YouTube. All I have is the Dan Marino Era and post-Marino Era.

The post-Dan Marino era is what brought me here and it included headlines and decision makers. Head coaches Dave Wannstedt and Nick Saban. The Dolphins finished the 2007 season with a 1–15 record, the worst in franchise history (I was at their only win against the Baltimore Ravens). Two-time Super Bowl winning coach Bill Parcells was named Executive Vice President in 2007. Here is when you get the Kleenex box out. In the 2005 offseason, the Dolphins showed major interest in signing free agent quarterback Drew Brees. However Miami was unsure if Brees’ shoulder was completely healed from a labrum tear he suffered with the San Diego Chargers. The Dolphins ended negotiations and traded for Minnesota Vikings QB Daunte Culpepper instead, a move that would haunt Dolphins fans to this day. God has more important things on his list so starting with training camp, preseason and the regular season with dreams of postseason play, I will counsel myself through another Dolphins season. One that I hope will end with tears of joy. Lets begin with 2016 training camp.

Cameron Wake is back from an Achilles injury. In a game against the Patriots, Wake notched his seventh sack, good for second on the NFL leaderboard, but he was also injured and carried off the field on a later play. It was an Achilles injury that had Wake out for the rest of the 2015 NFL season. Wake, for the first time, spoke at length at training camp about a rehab process that has consumed his most every waking moment.“The funny thing is the physical part, I’m not going to say it was easy, but it’s something that you’re very used to,” Wake said. “I’ve built muscle my whole life. It’s not new. Running’s not new. Lifting weights’ not new.

Here’s what is new: “Being mentally strong when you can’t get out of bed and you have to put your feet up for 30 hours a day, that’s the hard part. Watching your team play when you’re not out there, that’s the hard part. Being on crutches, being a little more dependent [on other people], those are the hard ones. It wasn’t the physical part at all. I’ve always tried my best in the offseason to stress myself, to challenge myself. But the part where you’re out of the game, you’re limited mentally, those are the issues.”

Dion Jordan is here but is he mentally and physically here? Jordan is back with Miami however not back on the field. The defensive end who was conditionally reinstated by the NFL after a drug suspension, was back at Dolphins headquarters on day two of training camp. But coach Adam Gase said he has no idea when Jordan will be back on the field. The NFL gave him the green light that I consider yellow; the NFL said Jordan may “participate in meetings, conditioning work and similar activities.” However the league said he could not begin practicing or play in preseason games until “arrangements have been confirmed regarding Jordan’s clinical resources in Miami.”

Arian Foster remains on the PUP list. The coaching staff likes Jay Ajayi, and it’s clear the Foster signing was more a reflection of the Dolphins believing they need a second back that can be relied on. Damien Williams is on PUP because he’s out of shape.

The big off-season acquisition is another new head coach. Adam Gase come on down. Gase becomes Miami’s fourth consecutive hire with no prior head-coaching experience. After the Chicago Bears hired John Fox as their new head coach, Gase came over to the team to be Fox’s offensive coordinator again. In Gase’s only season as Bears OC, the team finished 18th in total offense, while also recording 5,514 total net yards and 344.6 per game. The vibe is loose per se with Gase around however how fluid the situation is when the product is officially on the field is what’s yet to be seen.

0 0 0 0
Previous : Von Miller is no fried chicken
Next : The Dolphins make me cry, the New Miami Stadium